Stunner Virgin Lust: Why don’t you spell it P L A I N.? Plain and simple.

Hucka Doobie: I’ll field it. Both are correct. P L A N E is used to protect. Plain and simple, Stun… Go Go.

Suszie CorkLass: Is this where the Martians lived, Hucka Doobie?

Suszie CorkLass: What does it mean that one must pay The Bill in your blog Baker Bloch and Baker Blinker[…] and Hucka Doobie?

Sandworm Blaster: I feel that there are questions coming from the left that aren’t being answered.

Sandworm Blaster: No, over there.

Suszie CorkLass: I mean, that’s in your blog. Magellan Linden paid The Bill for damage to that, eh[…] teleporter. Teleporting machine. Something.

Hucka Doobie: I’ve apparently left out some people over there. Yes, you with the 8 foot arm raised up.

Torsit DeKooning: I killed Bracket Jupiter. Will Torsit burn in hell forever and ever now?

Hucka Doobie: You’re not Torsit. Torsit is a blog spirit and not real. I see you made that avatar just today, imposter. Add laugh: hee hee.

Torsit DeKooning: Torsit next kill Hurla Dontbee, Hucka Doobie’s great love of life. If Torsit doesn’t receive nice parcel in the hills of [Zindra] where he can have sex machine slaves. And kill them freely and without consequence. OK, just the slaves and not necessarily the killing, which I can do elsewhere. Torsit have deal?

Stunner Virgin Lust: I’ll be your sex slave machine Torsit. You can kill me also if you wish, but not too thoroughly. Just enough to turn me on quite completely.

Hucka Doobie: We have presented behind me now a more detailed map of the Plane of Bill…

So here’s the newest secret revealed. Bought an approx. 3000 square meter parcel in Asha on the Corsica continent for real cheap. But it wasn’t really the price that drew me in (although that didn’t hurt), it was the ability to own almost an entire low hill that centers it. I’ve already mentioned the hill’s name in the blog: Greentop, another coined term of mine and not an official name of any sort. If I’m figuring correctly, at 64 meters high it’s about the tallest hill you can have on this particular continent before the top begins to shift totally to a granite texture. Thus its top just *barely* remains green: Greentop.

The first picture below is actually a similar sized hill in Asha belonging to a near neighbor, capped by a nicely textured horse sculpture in that case. My Greentop is the larger and nearer of hills in the background, to the top right. 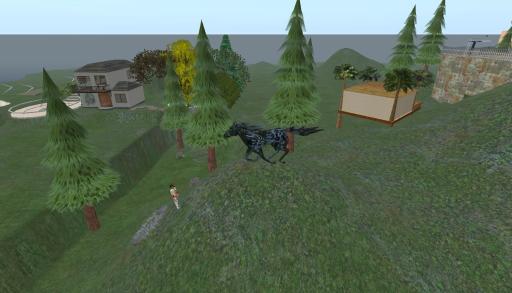 Shot of Greentop looking north across a fence I erected last night. I don’t usually like to put fences up, but I thought this one was needed for some additional privacy. About the only bit of extensive yard I have is just in front of the Victorian house also placed on the property last night, immediately behind this fence.

The only other structure on the property presently is a Coco Koala made cottage (“Ravenwood Blue”) that I’ve used in other locations as well. Very nice, little structure, with great textures. I decided to block the door with a tree, although those familar with SL will know that you can just pass through Linden trees. I also leaned a tombstone against the house, the northernmost one in yet another incarnation of the No Room cemetery first seen in Noru.

Great line of little hills extending directly south from Greentop, all in Asha. 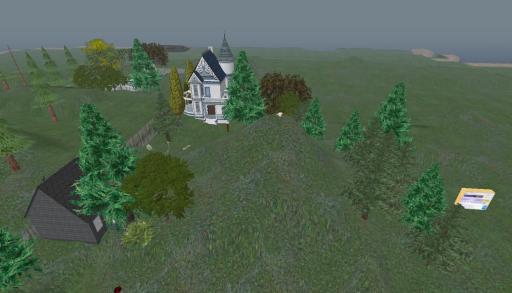 It’s not a regular shaped parcel, which is a nice change from most I’ve recently owned. I assume a skybox is next — I have about 450 more prims to work with, plenty enough for another version of the Edwardston Station Gallery if I choose (presently located in Otaki Gorge and also Rubi), or perhaps another Temple of TILE (also presently in Rubi). Should be a lot of fun, and I adore the property itself. Whole thing cost me a bit over 7 bucks. 🙂