Have come across several new Linden builds in SL and have admittedly given them the short stick in this blog at times, like the Moonbase just off Jeogeot and, going further back, the Magellan Linden landing site on the western tip of Gaeta. More significantly, I also didn’t visit Burning Life (just completed) nearly as much as I expected, since that’s one of the things that drew me into SL in the first place and I’ve had the week long event circled on my virtual calendar for months and months. So I’ve decided to change my tact a bit on this new find and cover it quite extensively, or as much as my energy will allow. I’ll treat it like one of my own builds, let’s say. 🙂

First off, let me get this out of the way on another topic. Ross Falls is an “official (SL wikia) name… nifty.
http://secondlife.wikia.com/wiki/Ross

The island has surfaced, Atlantis-like (except the opposite way, I suppose, coming out of the water instead of sinking into the water — more on Atlantean parallels later, though, when I get my writing warmed up a bit more), out of the sea between the continents of Nautilus and Mãebaleia, or the two southernmost of the 4 eastern continents (east of the 3 “western” continents of Heterocera Atoll, Sansara and Jeogeot, that is). It really just appeared, as a whole, overnight, because I was teleporting around the edges of Nautilus Friday night, maybe even Saturday night — didn’t see hide nor hair of it. But by Sunday night the island was there in full force. I was actually teleporting and running around the sea interior of Nautilus (as I’ve been doing for a couple of nights) and then teleported over into a slightly more southern, greenish water sim which I didn’t remember before. Cool, I thought, seeing actual ocean plants and fish and hills… why didn’t I find this before in my extensive explorations of the Nautilus water sims? Then I pulled up the SL map… and saw the island. This was pretty big news I realized, and it was the ocean floor around it that impressed me first. It seems the Lindens have really gone all out on this one. We’ll see how it develops, though — I hope they aren’t planning to divide most of the island into sellable property. It would indeed be very unique if they didn’t, then, and quite a reverse, in this limited scope admittedly, from the decrease of Linden protected land we’ve seen in these newer continents in comparison with Sansara and Heterocera.

So I’ll begin a shot from the interior sea of Nautilus, which has some quite interesting patterns at the bottom — very Okinu-like. I also liked how there are actual hills on the sea floor to help highlight the patterns further. 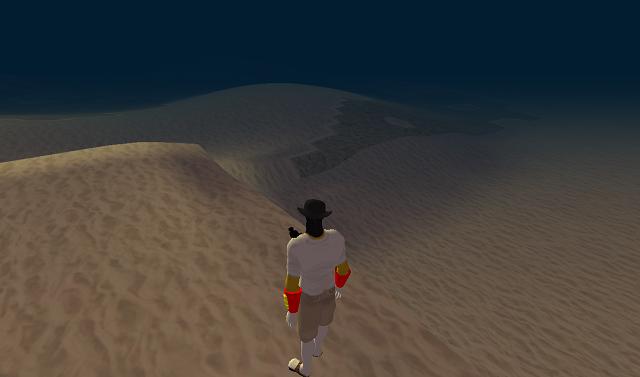 Moving again to the new island, it seems to be about the same size as the Burning Life island just derezzed in the ocean beside Heterocera, which covered precisely 22 land sims. Most of the sims here are a mixture of land and water, so this is just a guess. But it’s big. It’s maybe not quite the size of the main Azure Island where I lived, (I’ve called this island AI1 in my blog, or Azure Island #1) but it’s clearly somewhat bigger than the second largest of these islands (AI2).

Just to get my nomenclature straight, I’d personally call the main Azure Island landmass an island and not a continent, as some people do, although it could be the largest such island that’s not a continent (unless it is matched or surpassed by the main Dreamland landmass?). Kind of like an SL Greenland, I suppose. Either Gaeta or the Heterocera Atoll, then, would be the smallest currently completed continents using this standard.

I don’t know what most of the things I saw really are yet, and I’m sure all this will be cleared up more in official Linden releases coming down the pike. But here’s a snapshot of a particle, sculpture thingie that gives you some idea about how well done some of this stuff is. 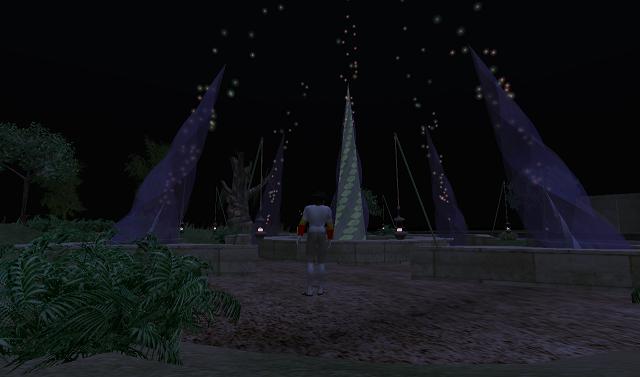 The centerpiece of the whole island seems to be this large circular area that I haven’t explored yet. The door to the interior is certainly impressive enough, though, and Baker Bloch was mildly surprised that he was allowed to open and close these huge doors himself. The doors come at the end of a *long* canal that runs through about 1/2 length of the whole island up to this point, and continues another sim-length to a central pool inside (according to the map).

As I said, Baker decides to leave this central part of the island alone for now, and teleports instead to this quite interesting and picturesque hill on the eastern side of the island. 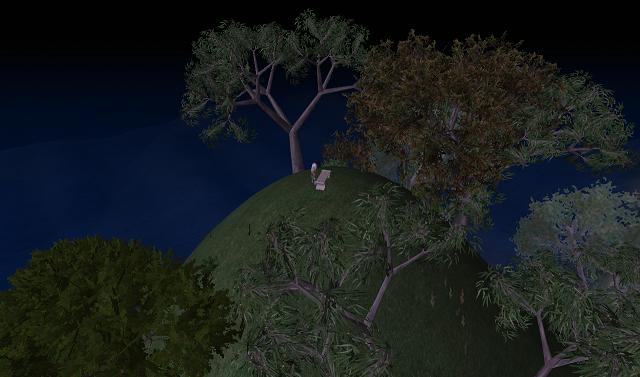 I’ll continue this exploration in the post above… see you there.

What I call AI2 here first.

Then a couple of AI1, where I live now.