Filed under: Edwardston Station Gallery,Gallery at the Temple of TILE (Klein) — baker Blinker @ 9:15 am

Then its 80 meters south to the open, lowest floor of the 60x60x60 cube. What to do with the Edna photos *here*? I really like how this space is set up, so I probably won’t make any major changes anytime soon. As I said before, though, I do probably have to make a decision about the 10×10: do the collages belong spread out amongst the various floors in the 60x60x60 cube, or should they stay in their original location on the property: the ground version of the Edwardston Station Gallery. I suppose if I had more visitors I could set up some kind of poll for them to help in the decision making.

Gallery at the Temple of TILE: Returned, 03

Filed under: Edwardston Station Gallery,Gallery at the Temple of TILE (Klein) — baker Blinker @ 9:10 am

But here’s the really exciting, new addition to the temple now: an exhibit of more of Edna’s new photographs preliminarily called “Ruins in the Woods”. I won’t give out many details of the photographs yet except to say they are from two different locations in our area, both involving “ruins in the woods”. One of these locations has been “cleaned up” since the photographs, and the other, more important setting is certainly in danger of being cleaned up as well, but in a very negative way (non-protection of what one might consider a very valuable, historic site). 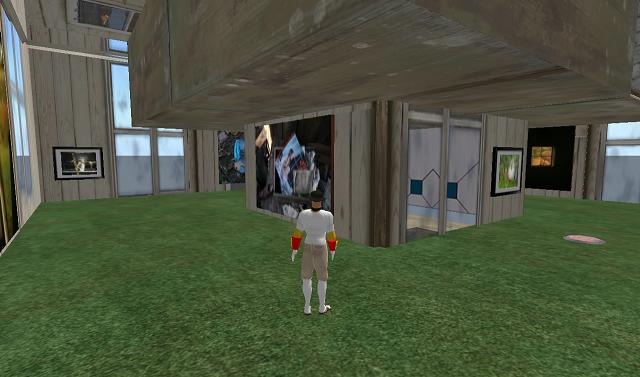 The two framed photographs of the exhibit, which, by the way, is on the lowest floor of the temple (originally grassy state restored again here), are not by Edna but downloaded from an unrelated internet site. I promise not to sell them for my usual 20-30 rl cents. 🙂 Both were taken at the more important of the two locations. This particular one is of a ruined piano. 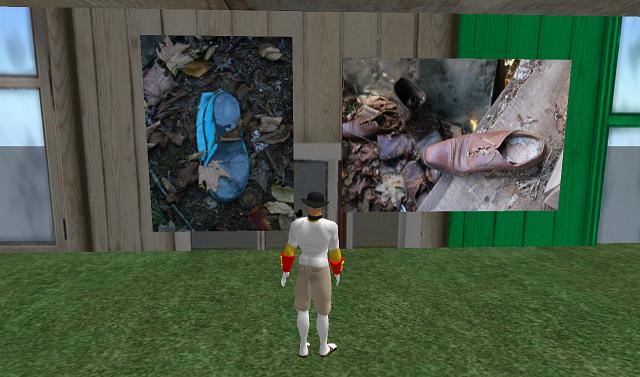 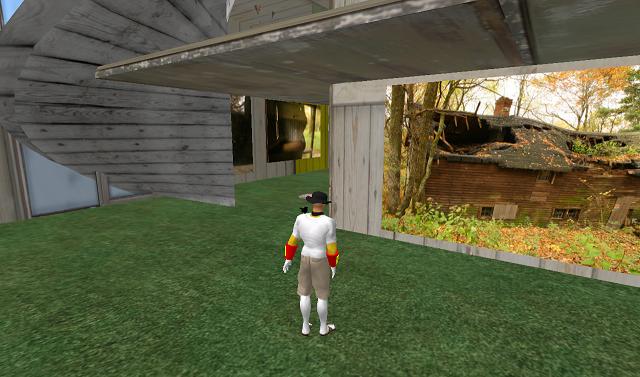 The second and final non-Edna photograph in the collection, a picture of an painting by a Mexican artist depicting a mythological birth of the woman who use to own the piano shown above. 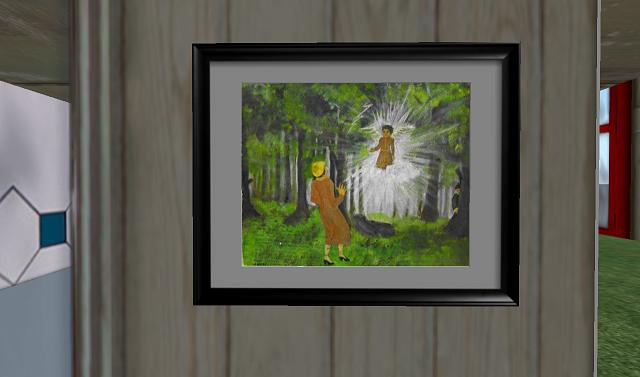 I’ll have more to say about this exhibit soon, hopefully, as well as some possible plans for the 60x60x60 cube just below involving music as well. As they say, stay tuned!

Gallery at the Temple of TILE: Returned, 02

Filed under: Edwardston Station Gallery,Gallery at the Temple of TILE (Klein) — baker Blinker @ 9:05 am

So let’s move inside the temple for a quick tour. This is the old floor 5 of the temple, as originally talked about in this June 2008 post. I’ve attempted to restore floor 5 to its original state, as described in that post, as much as is practical. Of course it could be modified again… 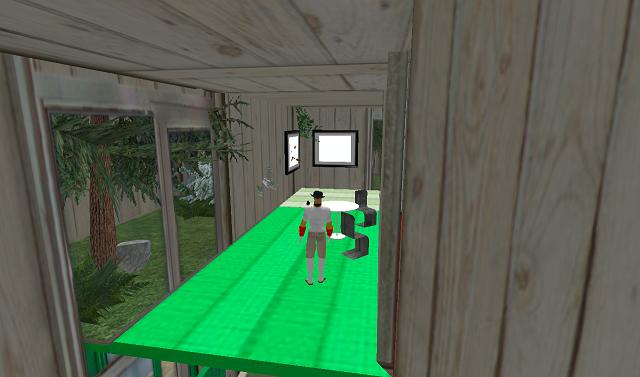 Looking down into the inner chamber of the temple with its spinning Tyle Cube. One thing I did change was to add a 4th wall to this interior, which would be the yellow one on the opposite side of the temple from this vantage point on floor 5, as we’ll still call it here. 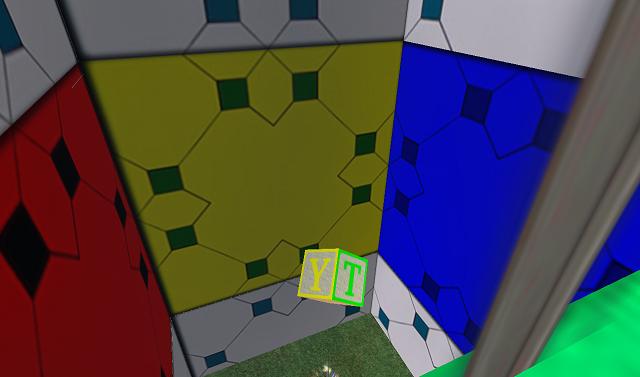 A snapshot, then, from the original floor 3, another restoration project of sorts. The 4th wall mentioned above is directly in front of Baker here, transparent on this side. I’ve decided to make this wall non-phantom as well. Presently, there’s no easy way into this inner chamber. (Xmas tree already up!)

On both floor 2 and floor 3 (keeping to old nomenclature, although technically there is no floor 4, at least as yet, in the new structure), I’ve decided to hang some of Edna’s newest OzLand photos, taken only last month. 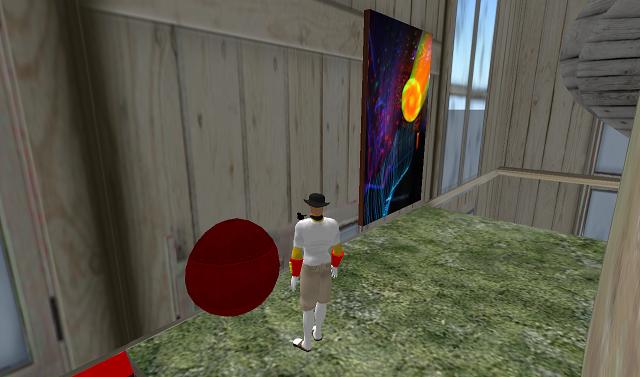 In the grassy part surrounding the plad rugged part of this floor, I’ve planted a number of palm trees. Looks like one’s already fallen over. Anyway, this is an attempt to cut down on the overlap of transparent walls in the temple, an ongoing restoration problem. I won’t be able to eliminate the problem altogether, I don’t feel. 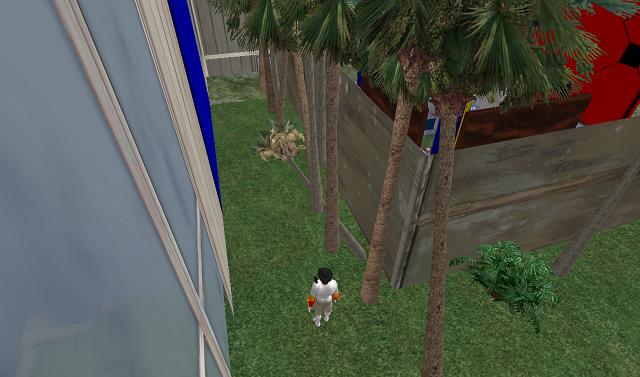 Gallery at the Temple of TILE: Returned, 01

Filed under: Edwardston Station Gallery,Gallery at the Temple of TILE (Klein) — baker Blinker @ 9:01 am

Hopefully I’m not going to spend a lot of time describing new additions to the Aotearoa property in this series of posts, primarily featuring the Temple of TILE and inclusive gallery. But I really missed the temple in the meantime, and any land I live on doesn’t seem complete without a version of it. So here’s the newest model, a type of throwback version even.

We start with a long shot of the gallery to give a spacial relationship with the much larger (8 times larger, volume-wise) Edwardston Station *Sky*box Gallery. And, just to remind, the main (I suppose) Edwardston Station Gallery is still on the ground, and houses the same 100 collages of the 10×10 that the skystation version does. I know — very redundant. I’m thinking more and more one or the other has to go, and it may be the sky version that will be deleted. But let me just move on to more descriptions of the temple and the subject will most likely come up again.

So the temple “floats” about 15 meters above the top of the much larger cube. The temple is 30mx30mx30m; the big cube, or Edwardston Skystation, is 60mx60mx60m.

Hucka D. and I chatted about this front of the temple a bit in a recent post. It’s the old one that was last present on, let’s see, could it be all the way back to the Rubi property? Maybe so, and if so, it hasn’t been rezzed in almost a year. More of the story of the front here, and how Baker Blinker “found” the silvery map on a cube in the very center of the temple, in fact, inside the spinning Tyle Cube itself.

The new development or twist in that temple front story is the subsequent discovery of another registered population place that perhaps should have been on this map but wasn’t included for some reason. In fact, it’s the only village that would be included in the square on present topographic maps besides Rubie and Silver themselves. This would be Joplin. About the only thing in Joplin as far as interesting businesses go is Black Dog Design, which he says has something to do with all this in a sneaky kind of way. But the absence of Joplin is the main thing Hucka D. says to notice about this. He states this has something to do directly with the Joplin Tree that was suppose to grow from an imported seed in the middle of Big Sink, but for some reason didn’t, perhaps tragically so.

Well, I thought, if it’s not included on this map why not just add a marker to the map in some way to indicate its “missing” location. The result is what I’ve been calling the Joplin ball or sphere, whose ruddy mass is presently located partly inside the temple, as seen in the picture below. The other side juts out from the temple front and into the transparent map itself, marking the Joplin location (not pictured).

Now is it just me or does that yellow sphere in the nearby photograph seem to flying directly toward the location of the Joplin sphere? I put that photograph there several hours before thinking about creating the sphere; maybe it’s another “sign” that the Joplin archetype, as it extends into Big Sink, is a subject well worth further study. 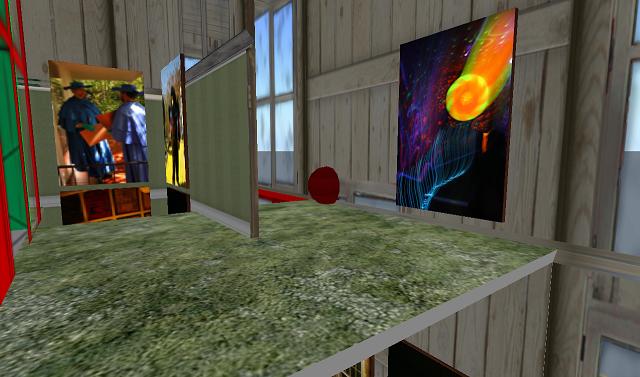 Another shot of the temple from above, looking down into the interior of the larger cube below. 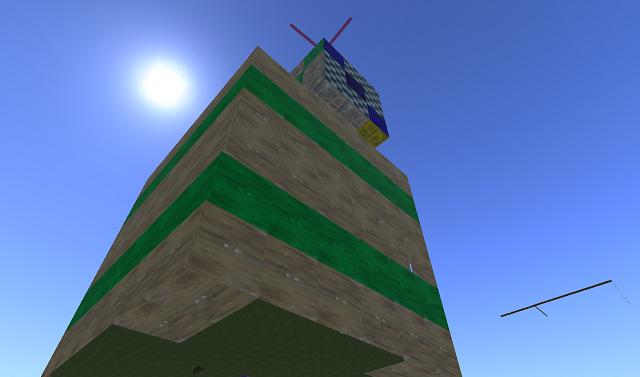 Then a snapshot looking up from the bottom of the big cube toward the temple. I think it looks pretty cool way up there from this location. 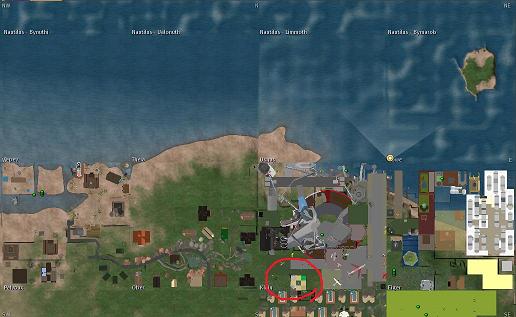