The first one up from the largest island of the complex features what appears to be a large nest with 3 yellow, silk-like eggs within.

A number of large tree trunks also appear on the island, along with a rock dock area and a smaller, domed building above it (not pictured). A duplicate of this building also appears on the largest island, not covered in my former Mare Secundus related post. No planetarium this time; only an empty inner sanctum. Another Mole work in progress? Could be.

Baker finds what first appears to be the back of an omphalos just off the west coast of the next island up in our “2”. 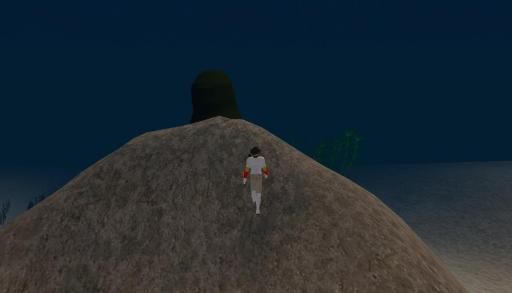 But when he rounds the hill he comes face to face with none other than the “Queen”, once more, who has made many appearances in underwater locations around mainland SL by this point. This particular “Queen” statue has either been buried in a mound up to her head, or else had her head removed elsewhere and then placed on this underwater hill. 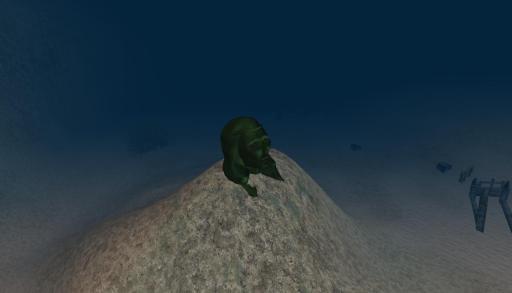 The prominent feature of this second island up from the largest in the archipelago is this 15 meter high, dome topped tower. When I first saw it from a distance, I thought the object had a definite feminine look to it, but up close: less so. Still, it could be connected with the Queen’s head just to the west; good to keep that in mind at least.

The 3rd, similarly shaped island — just going around the curve of the “2” once more, holds perhaps what are the remains of an ancient fort. No intact structure there, though. More big tree trunks, however, which aren’t present on the island just visited with the tower. Oh, and a giant *unfelled* tree, obviously of the same species. 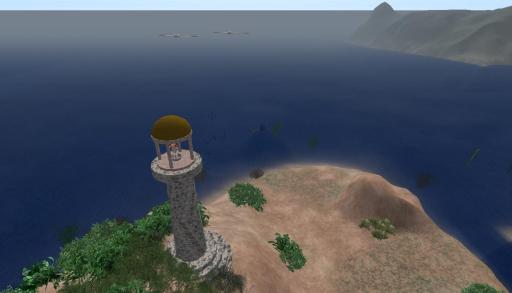 Fountain in the sea in the curve of the “2”. I’ll have to go back and take more snapshots of the many underwater scenes missed in this particular review. 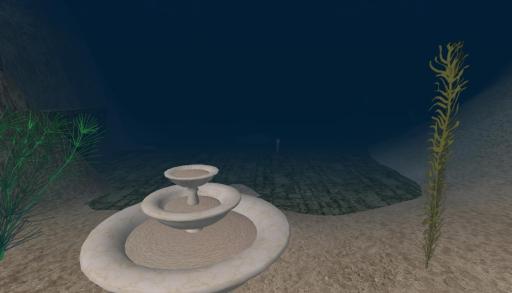 Another such giant, living tree appears on the 4th island at the tip of the “2”, along with a considerable flock of flamingos standing in a shallow pool of water just in front of it. I’m counting 37, but at only 3 prims apiece. Quite handsome and well done for such low allottage.

Map of the central part of Mare Secundus and the islands in question. When taking the picture I’m standing on the underwater hill topped by the Queen’s head.

Beauty spot on the western shores of the Baker sim peninsula. Especially like the inlet with the small island, and also the waterfall. The parcel appears to still be a work in progress, having only been purchased earlier this month.

Cool, flat sculpture (“Eye Giant”) in Fudo not far northeast of Baker. It lies near the southern end of a narrow but long mountain range paralleling a 3 lane Linden highway through a number of sims, including Gama, Fudo, Daikoku, Kojin, and Hotei. 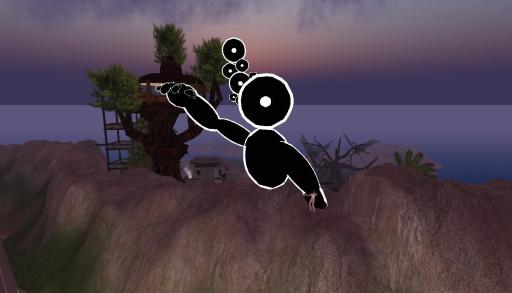 Now to Mare Secundus, starting not far east of this long ridge. Below, Baker has actually flown over to Suisin, just below Okinu, to view the new islands at the center of this sea from a distance first. And, yes, a significant section of these islands actually lie in the northern part of Okinu. No more Okinu glyphs, true (insert saddy face here) but the upshot is probably more impressive anyway, as I’ll attempt to demonstrate. 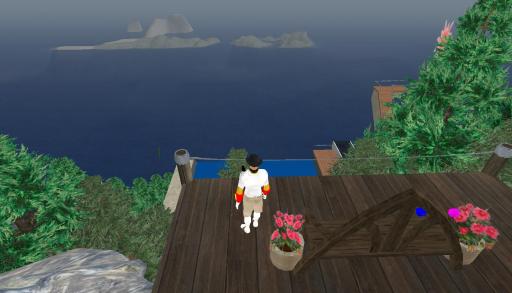 First off and to reinforce: this is a chain of islands and not just one island. But together they form a distinct shape; that of the letter “2”. I didn’t notice this upon first seeing the new islands in the sea on the inworld map, and only realized it when researching the sea through writings of others. This “2” is also approximately 1 sim high and a bit less than 1 sim wide, but itself is spread out over 4 sims, including Okinu, Thurston, Zolezzi, and Oehler. The largest of the numerous islands is split between Okinu and Thurston, and perhaps takes up about 9000 square meters, or about the size of my land in Otaki Gorge. It lies at the sw corner of the “2”.

Probably the most standout-ish feature of this island is a mysterious rocketship called “Icarus”, which actually sends one into space, or at least the atmosphere, when you sit in the booby rigged captain’s seat. The trip is very short lived, as you are ejected almost immediately after launch and fall several 100 feet back to the island. This seems to be the archetypal “Icarus” aspect of the trip, I assume.

Oh, WAIT. Baker Bloch is retesting the rocket today, and finds that it actually takes one to a different *world* about 1000 meters up. Perhaps some bugs have been worked out in the meantime (?) But, yes, this makes much more sense. Very impressive. I’ll *have* to include some pictures of this very soon. 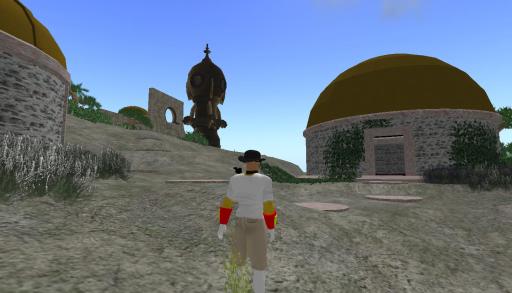 Then the other, prominent build on the island is a planetarium, where you actually have a moving model of the solar system. Not physics worthy (the outer planets are moving much too fast in relationship to the inner ones), but still fairly impressive. The rings of all the outer planets are clearly shown, and there’s even a comet wisking along an oblong orbit round the sun. The sun even has some flares emitting from it. Nothing much else in the building except some observing couches, where you can lie on your back and stare up at the stars. No explanation for what this is, and who built it and the nearby rocket ship. Why are the otherwise quite realistically depicted planets moving at such queer speeds relative to each other? 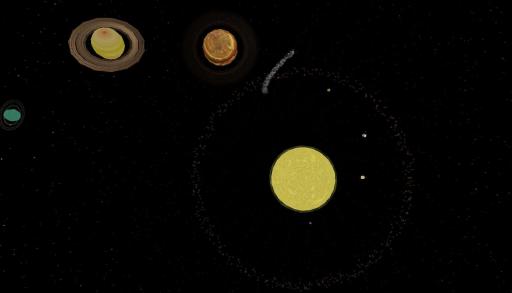 Baker also notices the legs of the rocketship have a quite equine appearance. Did the designers see a link between horses and spaceships?

Some shots from within the Icarus Rocketship. Very golden brown and shiny… much like the color of some horses.