Preview of things to come in Mare Secundus, spread over a number of sims in north central Sansara. More on that coming up!

Trekking a familiar underwater passage below Isle of Baker. This is the primary way Baker hiked out of the Sea of Solomon during his first days in SL, while still in the service of the rather sinister Ancient called simply Mr. Low. It’s lost some of its mystery, admittedly, but Baker felt it was good to retrace old steps anyway and reminisce. I’ve decided to give up my rental in the Baker sim, btw, since I now have the large tract in Otaki Gorge to deal with, along with Noru still in most ways. 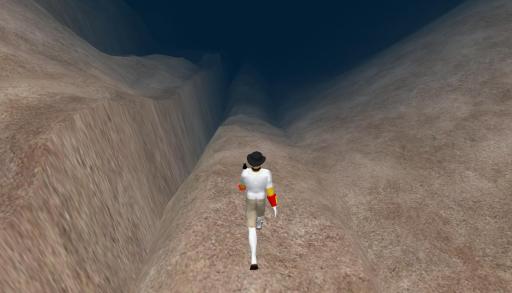 One of the unique things about the old continent (ie, Sansara) is the presence of these absolutely huge mountains just jutting up from nowhere. Heterocera has some whoppers, but they’re all a part of one long ridge around the central atoll. On Sansara, the topography is much more unpredictable and varied, a condition of the newness of SL when they were formed. All newer continents past Sansara have a much more regulated geography, for better or worse.

More new marine scenes in Mare Secundus. There’s also another, whole new Sansara sea to deal with as well more in the center of the continent: the Sea of Fables, which includes what use to be called Graduation Island(s). A Greek theme seems predominant in that sea at least.

Interesting structure on a western inlet of the Solomon Sea my Baker rental borders on its eastern side. Owned by Champie Jack, but built by famed explorer/architect/horticulturalist Salazar Jack, who might well be a relative of some sort — don’t you think? Whimsically called “Champie’s House of Fun”. 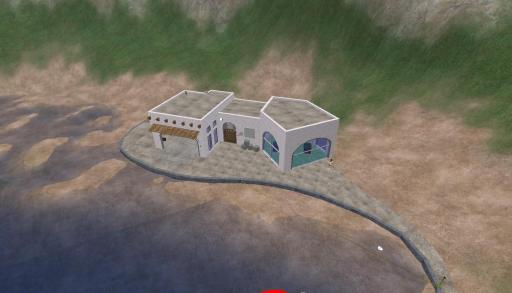 Baker sits within, wondering about what conversations might have taken place in such a setting.

Interesting, small pond in a rather empty valley just beyond Champie’s House of Fun. According to the land title, Baker stands in the Urtara/Islefin region of the Phobos sim. Here’s the land description: “Probable site of the Village of Alfendale that vanished just before The Great Erase. Large lagoon opens to the Sea of Solomon.” Yes, in checking, Champie’s building also lies on the same parcel, which makes up most of Phobos. I’ll have to check into that more for sure.

View of the pond including the next ridge over, which would be in BonnyDoon. I don’t think the landscape was near this barren when I first explored it in 2008. The partially hollow Mt. Metis, which I didn’t take any shots of this particular night, is the larger granite massif in the background.

Another curious landscape feature I don’t remember, apparently called “Lump”. Another hollow mountain as well, this time on the west edge of BonnyDoon. The many trees on top help disguise the dome-like appearance.

Shot from inside. Quite a large interior; quite imaginatively done.

Another curious land feature that you basically see on Sansara and nowhere else: a rather deep fissure running along a number of east-west sim borders, including the southern boudary of BonnyDoon. The fissure continues east from here, passing through the north side of Mt. Metis where it perhaps reaches its deepest point.

In Wilsonia’s explorations of Sansara south of here last year, she came across a similar but considerably deeper fissure along a really high granite mountain ridge.

Back safe and sound in our Baker sim home, looking out at Isle of Baker.

Below is one of the ubercool pictures from the current Kelly Yap Gallery exhibit, running through June 15. Come see!

Wilsonia found another temple while wandering north from the Snow Region, this one in Kelham. A part of something called Zero Point. Fascinating! So much so that Wilsonia didn’t really understand much of what was going on there. I’ll have to dig up a web site if there is one. Ahah! So there’s all you need to know. 🙂 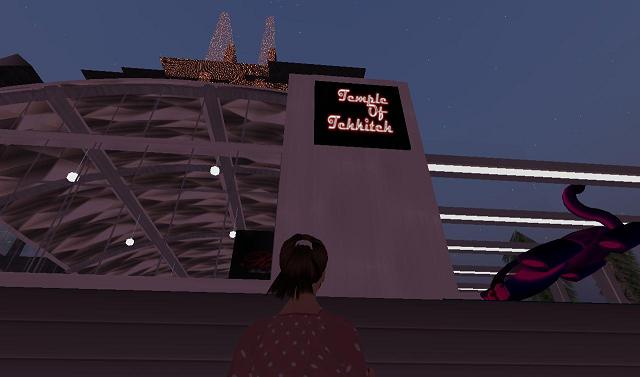 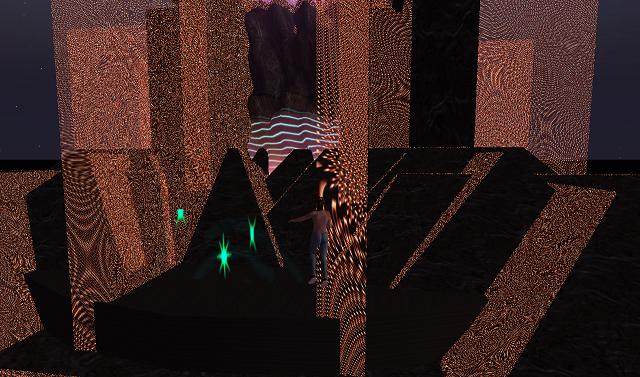 Back with her feet on solid virtual ground, Wilsonia also recorded this pool just north of the Enceladus Falls, also in the Enceladus sim. Actually, on second checking, I’m going to assume that this pool is artificial in nature, since it is so shallow and not owned by the Guv (Governor Linden). But it’s quite pretty anyway.

Wilsonia’s most dramatic find at the time has to have been this *massive* fissue found on the exact border of not just one set but two, *whole* sets of sims, or, east to west, Tethys (north) – Davos (south) and Mimas – Cortina. Below Wilsonia stands on the east end — notice the nearest structure to the beginning of the fissure on this side is Mysti’s Big Blue house (since derezzed, though). 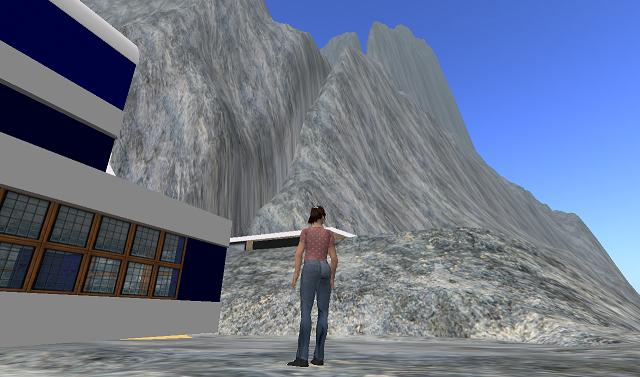 Here’s Wilsonia hovering near the center of the massive fissure. In checking back upon herself today, she estimates that at its deepest it has to be at least 100 meters. 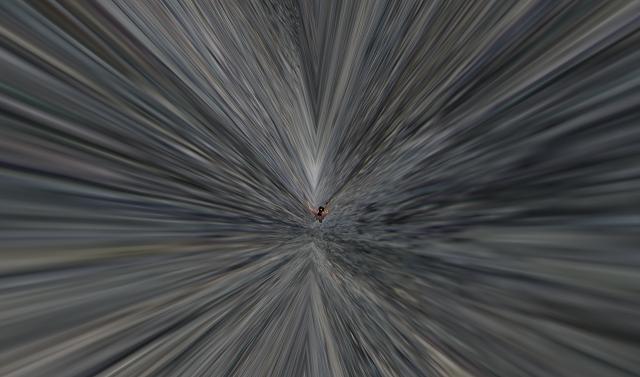 On the west end now.

Almost exactly 1/2way up the fissure on the east side, Wilsonia encountered a quite interesting grotto perched on its northern lip, designed by Julia Hathor, who I understand has a reputation as an excellent SL builder. The 1536 parcel is owned by the SL Public Land Preserve group, and was claimed in late 2005. In touching the associated kiosk set up on the parcel and reading a notecard about the group, Wilsonia surprisingly noticed that the top 2 listings the list of land the group has preserved happened to be in Alice, yes, the same Alice that bb has been talking to in this blog and the one that has been “touching” Kerchal or Kerchal for nigh on 5 years now. This had to be some kind of clue about the family’s “next step” in exploring Sansara mysteries.

The picture below is actually not owned by the SL Public Land Preserve, but is still in Alice. It’s called the Alice Forest, whose 4096 sq meters borders the Kerchal Forest on its western side. It’s certainly an interesting extension of the Kerchal Forest, one could say, and perhaps how the two “talk” to each other, if that’s a way to put it.

Here’s one of the two parcels on the list, a small one called Alice Pocket Park, complete with a tent, a picnic table, a couple of trees, and not much more. Still you have a nice view of the Kerchal Forest from here.

Alice then visited the second listed parcel, the somewhat larger “Alice Free Library”. As advertised, there were books for the reading, iced tea, and also a walled garden. But Wilsonia’s attention was most attracted by the book on the wall immediately behind the tea tray, which advertised an SL house based upon one of M.C. Escher’s more famous prints, called “Relativity”. She knew this was another clue, perhaps the central clue Alice held at this time (?)

I apologize ahead of time for the lack of many higher resolution snapshots beyond the smaller versions inserted directly into the posts, but Wilsonia’s SL camera was slighltly malfunctioning at the time. Here she is in the Uli sim now, another important checkpoint in the story of The Bakers and their extended family (which includes, of course, Wilsonia herself now). For it is here in Uli that Baker Bloch ascended from SL to RL at its central, volcanic island. More about that here as a refresher of sorts. 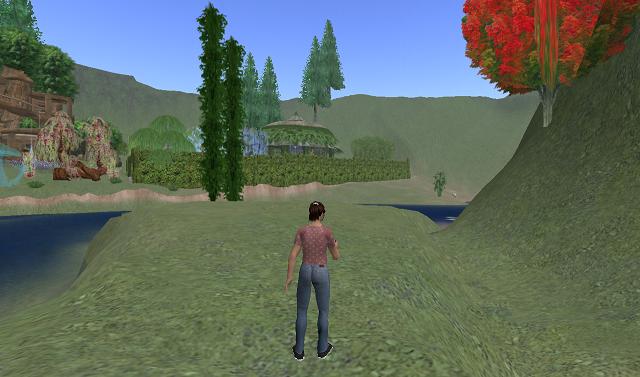 Wilsonia also finds this interesting addition to the central pool of the volcanic island, still with its guardian dragon intact. It appears to be a door or portal of some sort that she is unable to open by touching. However, using the diable camera option she finds that no portal is guarded, as the pool ends just below the supposed door. A false portal, then. 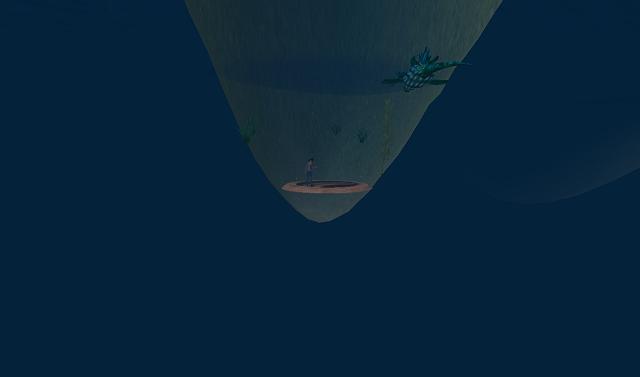 This night, Wilsonia also visits the Tethys waterfall region but is less impressed than Baker Bloch was upon exploring it originally, as recorded in this series of posts. She plans to revisit soon to see if her opinion is the same. 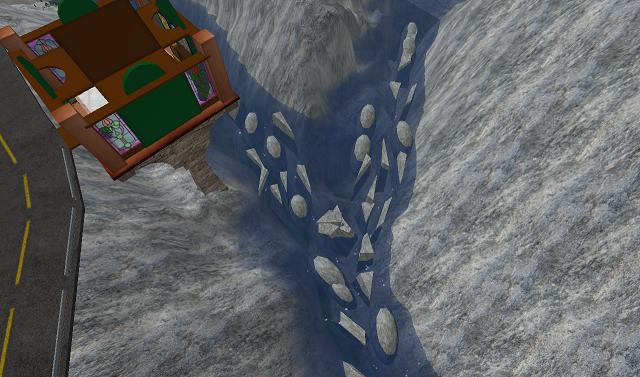 Wilsonia also visits the Ross Falls on the border of Ross and Clarksdale, situated a couple of sims downstream from the Enceladus Falls quite near the Tethys Waterfall, and on a different branching of the same stream that splits in two just before each falls. A situation that most likely could only happen in SL.

To remind once more, the Ross Falls is where Baker Bloch was able to miraculously peer out of the computer screen and into RL, if only for a brief moment. At that time he was able — or “allowed”, in his own terms — to view what he theorized could very well be his RL father. More on that soon, perhaps.

Wilsonia at the mouth of this same creek a bit west of the Ross Falls, with its interesting, mulit-hued bottomland that Baker Bloch also took note of. A long strip of green grassland separates the sand and granite sea floors at this particular position. Many hillocks in the area as well. 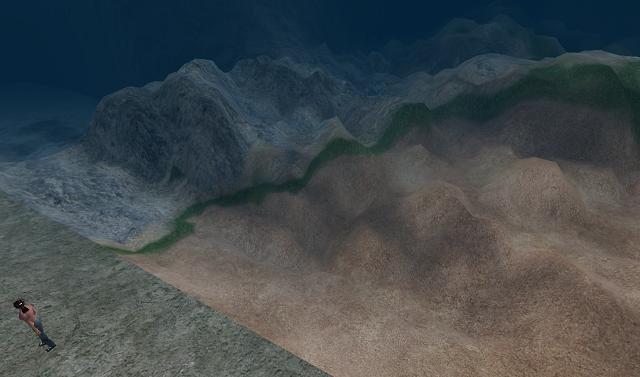 On the same split stream, but further upstream now, just above the beginning of the Snow Region to the south where this stream can be said to have its source. The 20 meter waterfall pictured below lies on the border of Arlberg and Garmisch.

Second sighting of an SL rabbit in less that 12 hours. Found in the Enceladus-Tethys Waterfall area already discussed a bit in this early post on my blog. But that’s not exactly why I was revisiting today. Took an inner tube ride over the waterfall, pointed out by my explorations in the Hilo Peak 1 area. Just happened to take me to the waterfall, which is covered in the next series of posts up in the blog.

Here’s the rabbit. Next to an outhouse. Outhouse… Outlands…? Filthy rabbit? 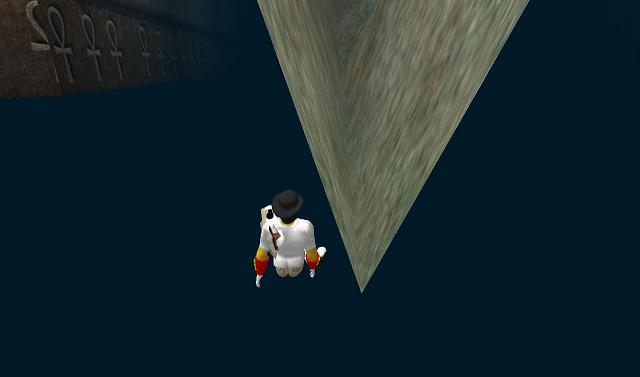 Cracks In Space and probably time

These shots were snapped in and around the Enceladus-Tethys Waterfall, described by the recently defunct Virtual Parks and Recreation System (sigh!) as the first permanent Linden made waterfall in SL. The whole underwater area from Atlas to Tethys and beyond is highly recommended for exploration fun. Plus if you’re attentive in the more difficult and tight navigation areas you get the bonus of seeing cracks and sometimes quite large gaps form in the space/time continuum. And sometimes you even seem to be located within them temporarily.

Of course Baker Blinker had to go see for herself this strange phenomenon. Judging by that one snapshot from the next post, she *really* fell into one of these gaps. Glad you made it back!

And I have to ask: do these cracks offer peaks into another world or series of worlds outside the SL grid? If so, my guess is that what we’re calling here the Ancient Ones had indepth knowledge of ’em.