The SL inspired abstract work of Bau Ur , who I met upon my first visit to Yapland. Very beautiful and moving. This is from Twilight’s Peace; her paintings are also found at the Palais du Gouverneur, Bourbon

Wilsonia was pleasantly surprised to find that the waterfall next to the Okinu sim was still there, with the inclusive parcel now providing a free inner tube ride that propels one over the end of a conveyer belt and directly into the waters of the Okinu sim some 30 meters below. Wilsonia quite enjoyed the ride! 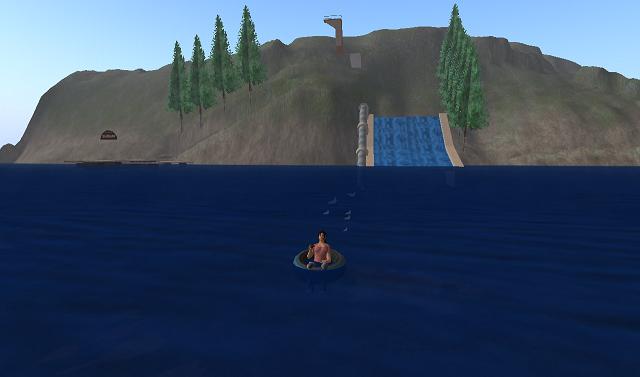 Then she had to jump off at a certain point and take a gander at the glyphs she knew would confront her when reaching the bottom. Hmmmm… this one has an interesting sawtooth shaped jag to it. 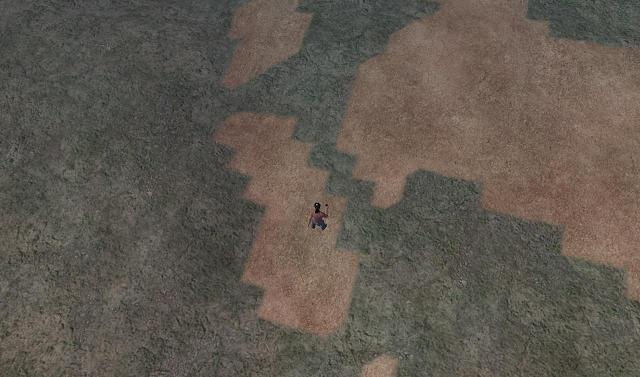 Then it’s on to the Linden Memorial Island with Baker Bloch once again. I neglected to advertise in this blog that the island is now open to the public (!). More info can be found in this post from the official SL blog. 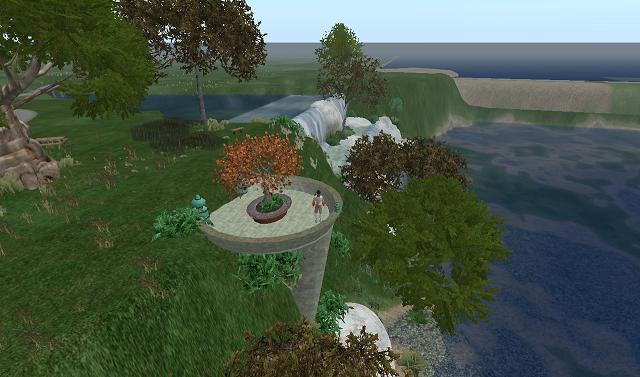 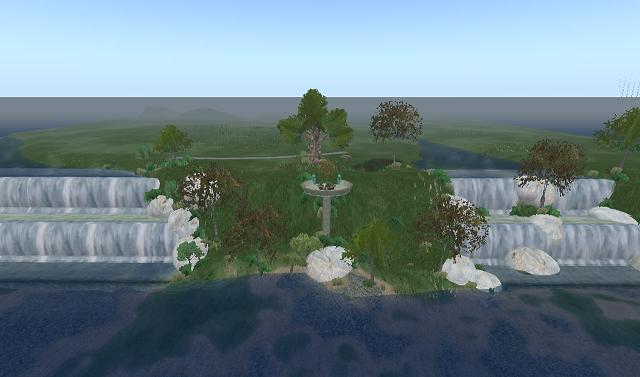 The same night, I believe, Baker Bloch visits some old stomping grounds in the Cecropia sim, namely the very green pool of water called the Grief Containment Pond, complete with a pipe that heads all the way south to ANWR. You can find out more about the latter here. Like ANWR, the Griefer Containment Pond is also listed as a Point of Interest for the Atoll Continent (Heterocera), but, as yet, doesn’t have any text on its particular page.

Anyway, back to Baker Bloch’s personal experiences with the pipeline that connects the two. Well, it does and it doesn’t. I’m pretty sure that Baker Bloch has walked in this pipe before, and I know Baker Blinker has. Before today, the Bakers were able to walk maybe a third of the way south toward ANWR before reaching a dead end. This day, Baker got stuck almost at the beginning. I’ll have to remember to send in the shorter Hucka Doobie to see how far he can now go. But at any rate, it seems that the pipe is narrowing, at least in places. More Sansara-Heterocera strangeness?

I don’t usually like to jump ahead of fellow explorers to areas they’ve advertised they wish to explore in the near future, especially to take pictures. But I did make this one exception. I’m sure fellow Sansara trekker Nish’s snapshots of the Fuchsia sim will be much nicer than mine, and the accompanying text will be much more journalistic.* However, I was struck by a *slight but perhaps still distinct* resemblance between this oddly shaped Linden created rook (chess rook, that is) structure near the western edge (left side of photo below) and my Darkside’s Temple of the Moon. I’m pretty sure I’ve been to Fuschia before, but I don’t remember this object at all, nor the forest that covers the much of the western part of the sim next to it. Hopefully Nish’s promised blog post concerning the sim will provide more light on this “mystery”.

Maybe it’s just the same combination of looking up through a crack in gray matter toward a blue sky. More research needed, perhaps.

Then it’s on to the “Something to CHRO About” gallery in Healy, but not with Baker Bloch this time, nor any of the familar, extended family. No, this is someone different: it’s the highly anticipated snapshot debut of *Karoz* that Hucka D. and I have been chatting about recently. As you can see, he’s very green. More on him later. Hucka D. has said several times that Baker Bloch and Karoz will be best of buddies in SL. 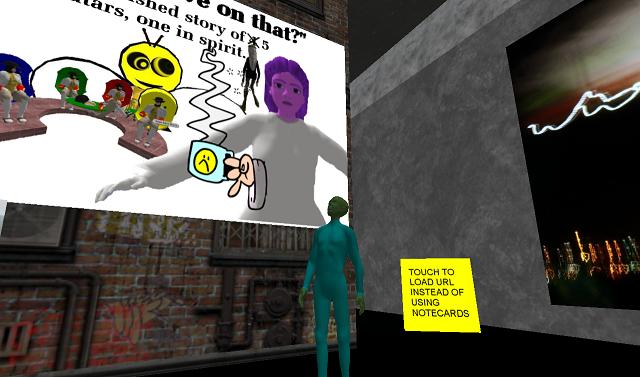 “Hey, I have pink hair now!” (Great… another comic in the lair.)

Moving on yet again, this time to Nova Albion, although I don’t think Edward Manray will be able to help me much with my examination of Sansara continent mysteries (thanks anyway for the im, Edward!), I decided on a whim to visit his office in a Grignano brownstone apt. building. There I spotted this prettily framed photograph hanging beside the front door. Judging by the appearance, this must be an ancestor of Edward Manray himself — is this gentleman, in a kneeling position, perhaps proposing to the queerly expressioned woman in the photo? Why is she looking directly at the photographer with such an expression? Luv to know the story.

On second thought, maybe Mr. Manray can help me out in some way. After all, I do know that Myst may be involved. 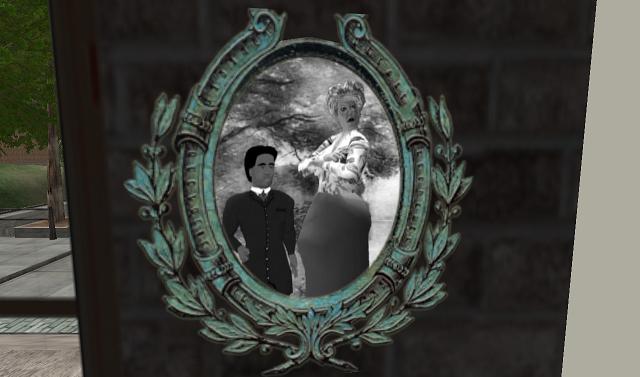 Baker Bloch walks from the Temple of TILE in Hibdon to the large, forested island next to Graduation Island explored last fall. Only forest on this particular island, though. And rock. Lots of trees and grass and ferns and rock.

A little while back, Baker requested help from a detective agency based in Grignano concerning the “mysteries of Sansara”. Perhaps they thought the request was a little too broad or maybe a little too daft. Whatever, he hasn’t heard back from ’em yet.

Another forest, this time a non-Linden one in the Pomponio sim. This one covers about fifth of a sim, and is densly packed with pines. A strangely out of place wood prim sits in a small, square clearing in its center.

More evidence that TILE is everywhere. All Things, as Hucka D. put it.

Albion Park, quite near the forest pictured above. Not extremely large but nice. On granite, and next to the Pomponio Volcano. In fact, I would assume, without checking, that both the forest with the wood prim at its center and Albion Park both share a border with this *smoking* Linden protected volcano parcel. According to the land description, they also apparently hold SL College classes here at times.

Then Baker Bloch popped over to the famous Forest of Kahruvel preserved by the Phyneas Jack Memorial Trust, specifically to check out the living quarters of Enja Mysterio, a long term resident of SL and apparently one of the few permanent residents of the forest. Turns out that I tied with Ms. Mysterio’s blog for the 94th most popular blog in SL, har har. What this means I’m not sure, but here’s the list in case you wanna check.

But in checking today more about Enjah another ahah! moment occurred. She and the detective I called up have one and the same user! Hmmmmm… well, that’s an interesting twist! Have to think about that more.

Baker Bloch also found another sim border fissure, perhaps as long or even longer than the one Wilsonia just found, but not as deep. Quite interesting; I wonder how many there are like this in SL? I know they have something to do with the much greater limits on terraforming that use to be in effect. 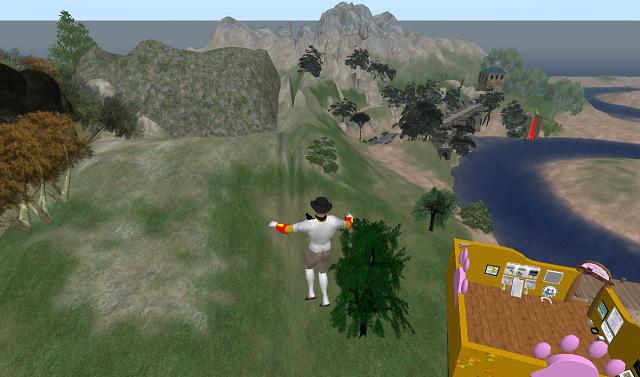 Such as we have an example of here! I don’t have time to send Wilsonia looking for these towering pointy peaks, but I can deduce from this snapshot they’ve got to be at least close to 100 meters high apiece.

A pop over to the Okinu sim, then…

… completed by a visit to Kissling. *More* weirdness here (as I found out a couple of days ago). A friend of *both* Ms Mysterio and my long time email friend Headburro Antfarm named Nish just posted about visiting this sim on her Big Orange One blog, as well as the Lusk sim. I’ll have more to say about that and Nish’s super-nifty Sansara explorings herself as soon as I have time. That’s all for now!