The creek as recognized by the Geographic Names Information System is spelled as one word. However it is widely spelled as two words Grand Glaize. It should not be confused with the Grand Glaize Creek which is a tributary to the Meramec River in St. Louis County, Missouri.

According to the Missouri Department of Natural Resources the lowest flow that could be expected in a 10 day period is 16 cubic feet (0.45 m3) a second [2] The creek becomes part of the Lake of the Ozarks at the extreme southeast corner of Lake of the Ozarks State Park.
Bridge
Main article: Grand Glaize Bridge

When Bagnell Dam was built to impounded the Osage River, it also impounded the creek which had previously flowed into the river. The Grand Glaize Bridge carried U.S. Highway 54 over what is now the Grand Glaize arm of the lake. The bridge was known as the “Upside-Down Bridge” because the supporting structure was built below the deck to allow for an unobstructed view of the lake. …

Besides the Lake of the Ozarks creek and the creek near St. Louis there is also an Auglaize River in Michigan/Ohio. Grand Glaize on the Auglaize River near Fort Defiance, Ohio is thought to be the birthplace of Chief Pontiac.

Significance? The Gran Glaize flow in Missouri is formed from the confluence of Dry Auglaize and Wet Glaize Creeks near Toronto, which in turn is near Montreal. Dry and Wet could refer to the two conditions of Concreek encountered in May-July so far, or the wet and dry conditions of the creek itself. Damsel near the old mouth of the Grand Glaize (which I suppose would represent the whole of Concreek in its two states, wet and dry) would equal the newly found and named Damselfly Island similarly near the mouth of Grandglaise — this is the only US pop place beginning with “Damsel”. Damsel is also the site of the Linn Creek-Grand Glaize Memorial Airport, reinforcing the Damsel-Grandglaize association. Like Concreek (as Con Creek), Grandglaize is often inappropriately spelled as two words, Grand Glaize, instead of one. Montreal and Toronto, being the two largest cities of Canada, may also represent wet and dry itself, or opposite colors red and blue through resonance with Missouri’s own two biggest cities of St. Louis (redbird red) and K.C. (royal blue).

In fact, however, in checking again, it looks like Conns Creek meets up with Sellars Creek to *form* Wet Glaize Creek, and the village of Wet Glaize is instead on Miller Creek, a tributary of the latter. Hmm, also a Chalfant Cemetery in Seven Springs Hollow off Conns Creek.*

What does all this mean?

This assumption is reinforced in this 1920 map of the county, where once again there appears to be no Wet Glaize Creek (just the village) but a Grand *An*Glaize and a Dry Anglaize that meet near Damsel and also the curiously named Zebra hamlet. Also on this map there is no village named Dryglaize (also claimed by the GNIS database to be later named just Glaize, to add to the confusion!). A zebra is both black and white — wet and dry once more? Is it also curious that the now dry Concreek bed has recently revealed to me an obvious black-white stone pairing?

And then on this 1895 map we have Dry Glaize, Wet Glaize, Auglaize *and* Glaize villages appearing, but no accompanying named streams. 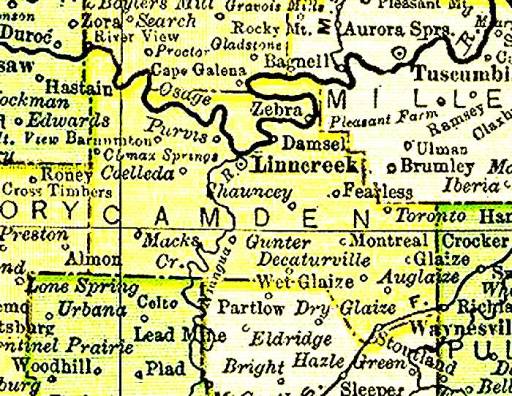 [Cooper and Carl look at the space where Desmond vanished]
Cooper: What was here Mr. Rodd?
Carl: I trailer was here. What the hell d’ya think?
Cooper: Could you tell me whose trailer it was, and who stayed in it?
Carl: Yeah, it was an old woman and her grandson.
Cooper: Could you tell me what their names were?
Carl: Uh… Chalfont, that’s it. As a matter of fact, ‘Chalfont’ was the name of a family that rented this space before, or at the same time. Two Chalfonts. Wierd, huh?