Sad to say that most of what I’ve been calling Nowtown in this blog has become abandoned land, including this pool with an underwater bar. 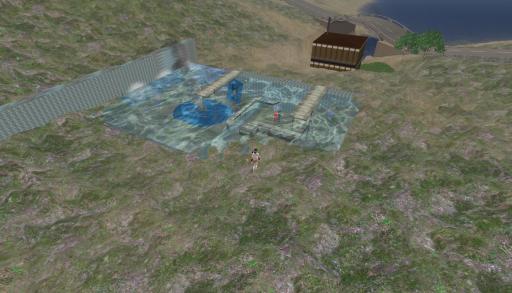 However, the Brainwash Art Centre, snuggled underneath the rather towering green mount in Somerset, remains open. 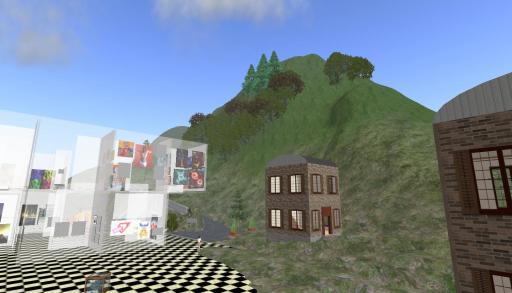 Moving back to West End, Baker Bloch finds an inviting, cracked door in a house sitting right next to the blue-green pool with the double lidded chest full of gold buillion. He latches onto the idea that this represents an invitation to not only go within the house this one time, but perhaps many times — make this a home away from home for a spell, and a base to further explore the quite fascinating ins and outs of the West End community. 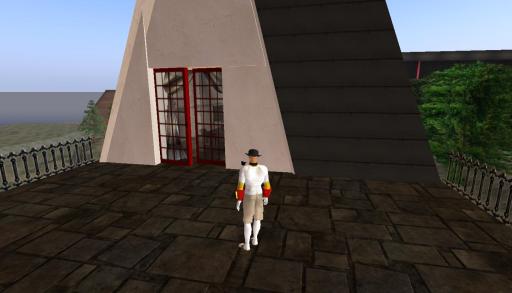 This is about the best view he can get from within of the blue-green pool. Can’t see the aforementioned chest from this vantage point, though, which lies on the opposite side of the small pool from here.

There *are* some great views of the giant coconut structure nearer to WES, though.

Looking up from directly beneath the mole statue commemorating the finding of the first sculpted prim. Right next to WES, as mentioned before.

Then some more details from WES itself. 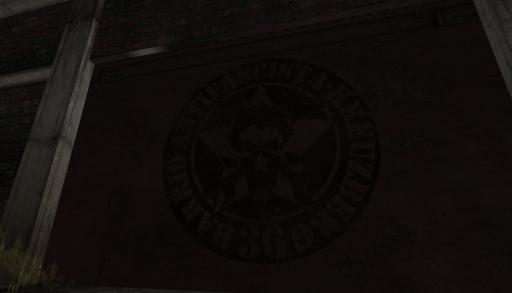 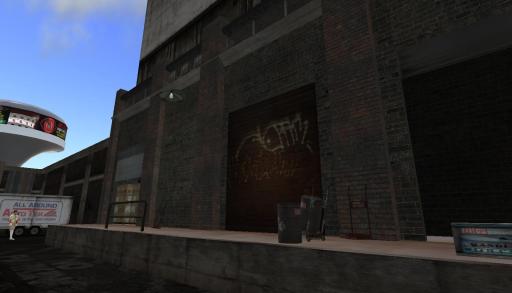 As Baker Bloch walked away from the scene above after taking its picture, he turned around upon hearing a sawing noise to see the trucks just left behind enveloped in some sort of amorphous, blue blobby thing. Griefer attack?

More of the same then appeared in the skies in a different part of WES. *Two* coordinated attackers? 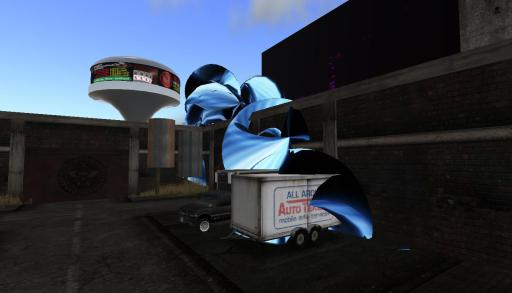 Baker attempted to remain calm while the sinister looking shapes gathered force around the town. He decided that ignoring it and going about his business there would be best choice to make. Below is a picture Baker subsequently took of a more interesting, corner building of WES (southwest).

Besides the one building on the eastern side with the lounging area, Baker found all buildings of WES devoid of objects, in continuing to poke around that night. The city appeared almost completely abandoned. If The Beetles were indeed in WES, it seems they have left the scene long ago; a dead city we have here.

The owner of West End Shippping (our “WES”), is Valin Frye, who use to run a popular SL dance venue called Club 9.13, doubling as its DJ. In checking his profile and information online, quickly found out that the club use to be situated in the Winchester sim on the Nautilus continent. Finding this former location on the inworld map, I was amused to see Winchester surrounded by a number of other MASH related names such as Radar, Trapper, Hawkeye, Klinger, Hunnicutt, Flagg, Potter, Mulchaey, McIntyre, Houlihan, Rizzo, and perhaps some others I’m not familiar with. 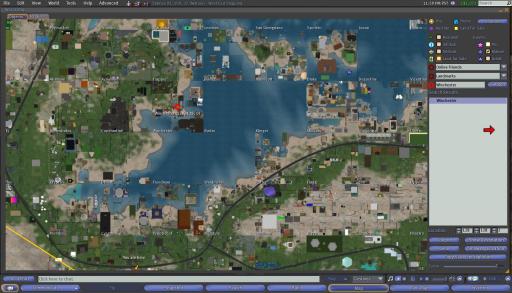 In his SL profile, Valin also quotes Peewee Herman from “Peewee’s Big Adventure” (“I’m a loner Dottie. A rebel.”), and lists having a lemonade stand and making lemonade as his only interests.

Random bits of unrelated information, it seems, but for various reasons I can’t fully disclose here, I think these are clues/breadcrumbs. Marty *has* been here!