So now we come to what is or was perhaps the center of the *second* West End culture, again according to wise guy Hucka D. I suppose the name of this urban grunge style town would technically be West End Shipping according to the land description, but let’s call it West End City. For now.

So here it is, situated in the Stanlee sim. Very gray-brown, and taking up something less than 1/2 the sim’s area. Is this *really* where Marty lived (again, in Hucka -speak)?

I would return the next night for additional poking around, so I’ll save more blog talk re WEC for posts just above.

West End City lies at the western terminus of West Coast Road, adjacent to this mole creation celebrating their own culture’s discovery of the first sculpted prim. A more artistic picture of this sculpture by my new SL and Jeogeot pal Melodie Darwin is here, making the work look much larger than it does in virtual person.

In fact, my own discovery of this photo first alerted me to Ms. Darwin’s own, extensive interest in Jeogeot, as demonstrated in her several picture albums from the Snapzilla site (to date: “Circumnavigating Jeogeot”, “Route 10”, and “Route 9”).

Behind the mole statue looms this more interesting building that looks like a giant coconut.

Interior shots first — there’s my free waterfall again (!), presently set up in not one but two places in Pietmond (extreme eastern and western sides). Free plants all around the waterfall as well. 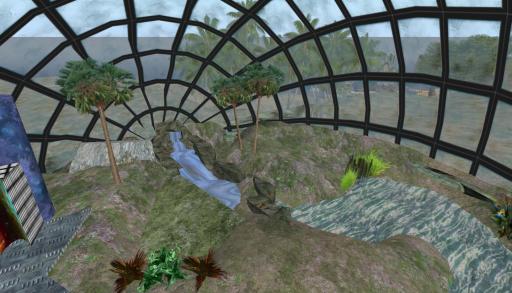 Also in the hollow coconut innards is this “transporter box”, apparently non-operational. Judging from extensive construction being shaped in the sky just above, it appears all this is still a work in progress, as they say. The parcel’s name is “u lu lo chu i,” and owned by Achila Sparrow under the group Zen Monster. Looks like Achila owns about 1/8th of Nightfield just west of Stanlee, and has used only about a third of her allotted prims in that sim so far. 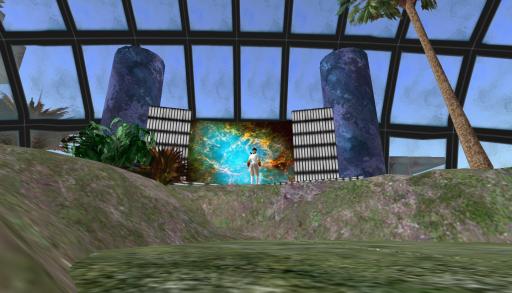 In the northwest corner of Dreamtime, caddy-corner to Nightfield, Baker finds a small, furnished cottage for rent. He can’t enter the parcel, though — someone currently renting it and blocking access? A curiously small building surrounded by much larger structures, which is what attracted Baker to examine it more closely in the first place.

Moving back into Nightfield, Baker finds a strange, two lidded chest filled with gold on an islet in a very blue-green pool. The inclusive 512 parcel is owned by avatar Shandon Loring, who describes himself as both a real and virtual traveler of many times, places, and worlds. 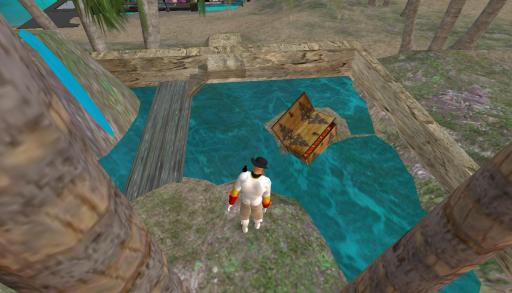 Still in Nightfield, Baker finds this nice patio overlooking the ocean to take a well deserved break. But he could personally do without the fake snow; his user has seen enough of that in RL lately! 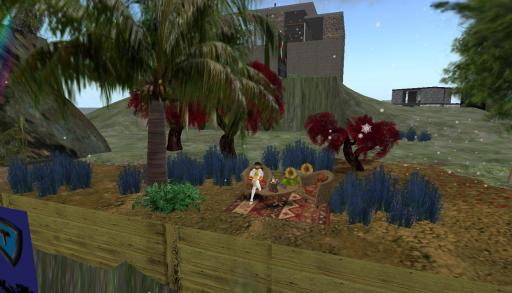