More isolated mountain, previously unknown about, on edge of smaller highland area located in southwest Jeogeot. The great majority of the mountain, which is about a 1/3rd of a sim in area, is owned by the Vista Animations and AO group, who request to keep their property private for members only. Baker hung around just long enough, then, to get the information I typed into that last sentence.

The mountain is in the northwest part of the Ultron sim, named for a character in comic books published by Marvel Comics.

Closeup of images from several, identical particle emitters on the next few 512 parcels to the immediate east. 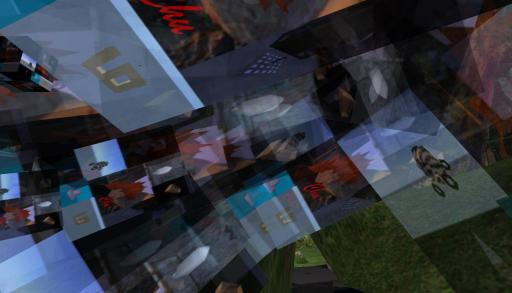 Although I explored more of the approximately 4 sim high and wide Highlands this same night, I chose not to take any more pictures for some reason, although I did even contemplate buying some land near its center, on a ridge joining two higher peaks. I will mention that on the eastern slopes of a ridge in Striebs lies the Linden protected park known as Oak Hill. You can readily guess the predominate type of tree found in the small forest there.

Back to Pietmond, then, I thought I’d snap a picture of the recently added Blue Feather Gallery, moved week before last from Teepot and essentially making the latter totally abandoned now. Shame… but in retrospect it’s easy to see that, ultimately, either Pietmond or Teepot would win out; the two, quite similar villages could not coexist for very long.