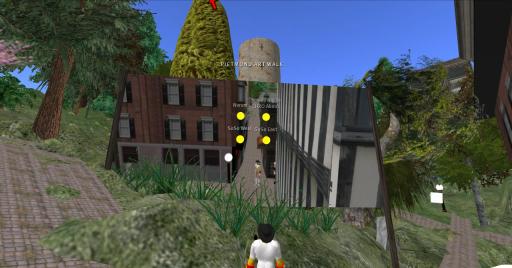 * Won’t have kiosks for several galleries now in Pietmond but just one kiosk for this Pietmond Art Walk. SLurl will be beside this map of downtown galleries, just off Main Way across from Orange House. Good view here down Main Way into the heart of town.

* Create notecards for sign and also at front of galleries on info cube (or equivalent). Standardize how pictures are described, and also prices.

* Create special notecards for TILE cathedral labyrinth and also Pod Room, or 1st and 3rd floors of that central, large structure. Something To CHRO About gallery is on 2nd floor of same — view down and up there.

* Think of adding one more gallery to the walk, which would be inside the Quad Towers to east, even, of TILE Cathedral. Contents: presently unk.

New Pietmond gallery opening soon called Norum. The gallery sign was made from part of the old Norum water tower, still set up on my new Otaki Gorge land I rent (Pietmond South, as it were). I think it looks kinda cool. Tall Narrow House, which is now the Norum gallery structure, also *was* in Pietmond South as of a couple of days ago, but is now replaced by a rather large castle, another Moard Ling creation. I’ll get to that in a moment. So one could say that Tall Narrow House was actually, physically (virtually speaking) moved from Pietmond South to the downtown area so that the castle could be built. Official Pietmond history we’re talking about here. 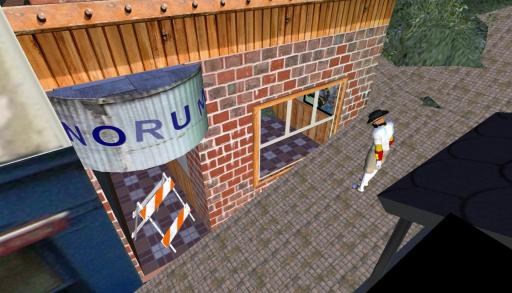 Added a freebie kinetic scupture recently uncovered in my inventory to the downtown area. New Norum gallery sign is in the background, but you can only see the letters “No…”.

Baker looks up into the second floor of the Norum Gallery at the exhibit developing within. Again, I’ll have more to say about that soon. The gallery should be open by this weekend, as well as the Something To CHRO About gallery just across the sidewalk. That’ll make 4 separate gallery spaces within the downtown area, then: SoSo East (Oblong series), SoSo West (Casey exhibit), Norum, and CHRO. Two east of Main Way, and two west. Nice little gallery walk, as it’s turning out. 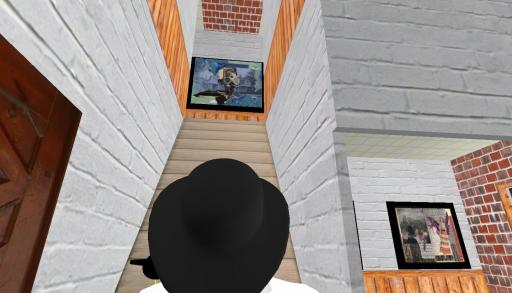 New design in a window of SoSo East.

Pietmond as it currently looks, with that large-ish castle mentioned before in the background, on the edge of the now somewhat smaller Piney Wood.

But as Hucka D. and me were just talking about, it’s going to have to go soon enough. 😦

Moving now to Teepot, I’ve decided to rez Gallery Jack there, deleting House Greenup in the process. I’m trying to reduce redundancy between the two towns as much as possible. Since I had House Greenup in Pietmond, and Gallery Jack needed a new home, it was a logical choice. Fits quite nicely and snugly against the Blue Feather Gallery, with the latter simply rotated 90 degrees from its former position, give or take a couple of feet for sliding adjustments.

And I was very pleased to find out I could save my Teepot waterfall, moving it to the back of the repositioned Blue Feather Gallery. Former Rook Way, Blue Jay Way, and Number 9 Way have been combined into one way, Blue Jay Way, which runs east by the front of Gallery Jack and the Blue Feather Gallery before turning south toward the top of the waterfall here. Gallery None still sits on the hill up the stairs; still basically empty save for 3 collages and a chair.