I’ll perhaps have more to say about Cabron and a “remembrance” soon (see cover of current Toy Avatar Weekly as well). Again, it was an illegal build, planned to be a small art gallery, that has now been deleted, just like the case with the similarly illegal, proposed gallery of Just Call Me Ernie Banks in the Cub sim from last spring, along with the later Cub beehive. The new proposed gallery, again a Hucka Doobie creation, was set to be called the Beehive of Truth.

The final shapshots, then. I suppose the parcel was cleared probably within 24 hours of these.

Then Karoz found himself on Azure Island #1 for some reason, and wandered onto this interesting parcel Baker Bloch told him about, a former neighbor when he lived in Neith last winter. Karoz thought the view outside to the now barren Inland Sea of that island was worthy of a snapshot or two. Very sad, though, for me, his user, since I remember the forest from before.

Karoz visits the Linden Memorial Island for the first time, and is impressed (!)

A cardinal in the Rookwood sim. Nice to see a number of birds flying around in the trees here…

… and the profusion of wildflowers. 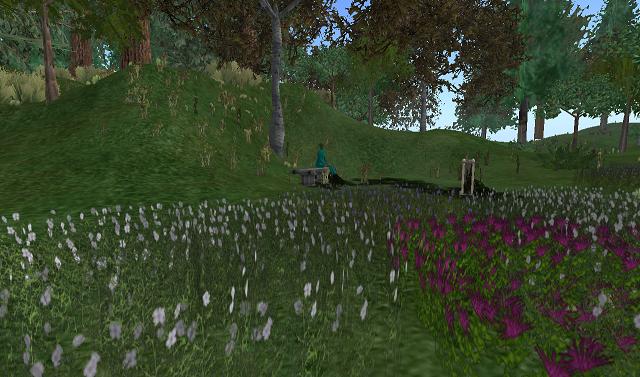 Meanwhile, Baker Bloch is exploring the upper reaches of the 30 sim Korean Channel Karoz seems to have lost a bit of interest in lately.

Here Blochs is in Sacrelle at the very northwest corner of the channel, with its interesting cluster of elogated islands. Baker Bloch stands on the largest of these below, which also happens to be the one closest to the southeast corner of the sim.

Baker Bloch is counting about 7 total islands in the cluster, with a number of other peaks whose tops lie just underneath the water’s surface as well.