Observation Rock. Actually a number of rocks piled on top of each other, but also the top, flat rock could be called such by itself, I suppose. Anyway, from the top you can view the entire Darkside bowl, although the tree cover is too dense even in the winter to make most of the prominent bowl rocks out.

Tombstone Rock atop The Cathedral. No inscription, though (thankfullly!). 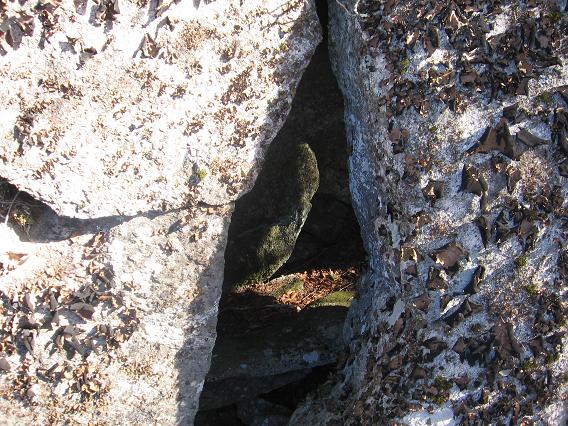 Another, better photo of Pentagon Rock, as promised in the first post of this blog re Darkside. Again, it looks the same from both sides — soon I’ll go back and take some measurements of this and other, select rocks in the bowl. I’d like to know, for example, exactly how high the Temple of the Moon is.

Observation Rock (left) with close, lower companion The Point. Looks like an equilateral triangle from this angle, doesn’t it?

Yet another suspiciously evenly shaped rock. I call this one Diamond Rock. It’s right behind (north of) Pentagon Rock.