Temple of the Moon from the south rim of the Darkside bowl or basin.

West Wall looming above the treeline, as seen from the top of East Wall, forming the west and east borders of the Darkside bowl respectively. 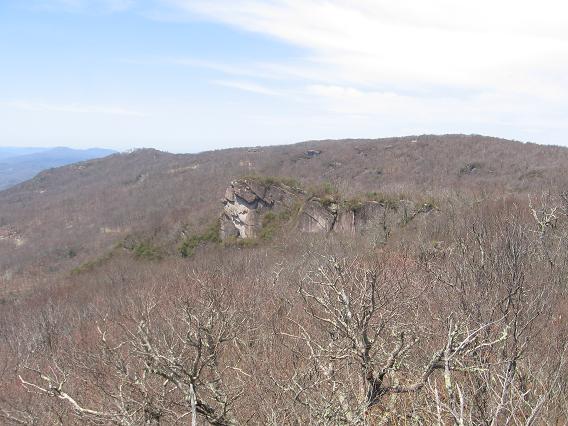 Looking the other way now, this is a house also seen from top of East Wall. You can also see the rocks forming the top of Beach Mtn. just behind and to the right of the house.

What I call The Cathedral, and a close up of the Welcome Mat rock. Queer right angle corners on each side (?!), and its right square in entrance to the shallow fissue that makes up the interior of The Cathedral. This is on northern end of The Glade.

Pentagon Rock near The Cathedral and below (south of) Observation Rock. Looks exactly like an evenly “squished” regular pentagon, and from both sides actually. Another picture of this rock from earlier in the day (diff. day, though) is found in this follow up post on Darkside.

One Response to “Darkside, 1”