Walked from Butler sim rental unit back to the deserted island next to Graduation Island, as I’m calling it. Came out of the water to this sight of meditating (?) avatar in mid-air. Perhaps a nature worshipper?

I really like this island, but I think it attracts other people as well for the same reason. Who can blame them — true wilderness such as this is hard to come by in SL, as I’m well aware of. Still I plan to visit now and then, especially in the middle of the night when less people are logged in.

Baker Bloch catches sight of the second (Graduation) island, although with this draw distance he can only make out one of the many trees on this island.

Shark!!! Blochs wonders how he’s going to get off Graduation Island now he’s on it, without “cheating” and teleporting elsewhere.

But he makes it around the shark somehow, which never breaks out of its circle to attack him. He continues toward what we now call the Ross Sea, and meets this sparkly complex near the strait connecting this sea and the Ross Sea further west.

Somewhat like Homer Simpson before him, Baker Bloch discovers a portal to the third dimensional world, uncovering a startling revelation.

Baker Blinker later goes up to the Wright House gallery porch to take this snapshot of the newly positioned NOOB.

She then realizes that there is not one but two collages within the gallery showing her counterpart Baker Bloch in the same “sleeping” (inactive) position, both from the Hidalgo series created just this spring.

This is the 7th of the series, called “Labyrinth Squared”. Baker Bloch is positioned within a hedge maze (not techinically a labyrinth, since it contains dead ends). In his interpretation of the collage, Hucka Doobie stated the hedge maze represents Sansara or the old continent, with the paths between the hedges representing the water passages Baker Bloch was so enthused about walking at an earlier point in his SL existence, and which, actually, he’s getting more into lately as well. 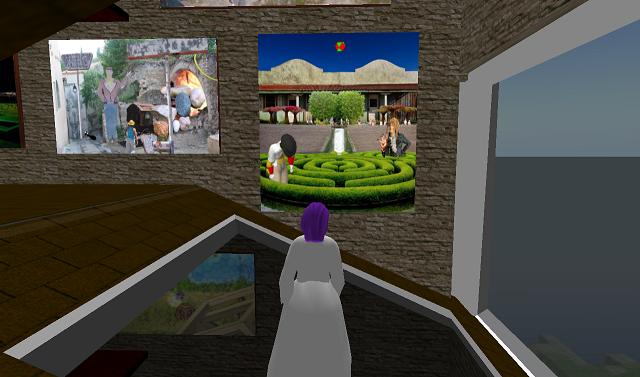 And this is the second collage with the “sleeping” Baker Bloch, this time the 5th in the series, named “After/”.

While she’s logged in, Baker Blinker also decides to stop by the old Gliese property to have a look around. She spots this house on the property essentially caddy-corner to her old lot, and discovers that it’s the same as the Wright House included in her box of building freebies, which also yielded her original Azure House (Misti’s Big Blue House). Odd, she though, and also, to add to the queerness, she found out that Baker Bloch had attempted to rez this same Frank Lloyd Wright inspired SL house on the Rubi property just a couple of days ago, but found it to have too many prims to be useful there.

So Baker Blinker decides to craft an im to the owner of the house and attempt to relay this little chain of oddities, adding, at the end, that she is owner (or Baker Bloch is owner) of the new Wright House Gallery, with the namesake not Frank Lloyd but recently deceased Rick Wright of Pink Floyd fame.

Baker Blinker was attempting to rez something on the Rubi property (still for sale btw… come and get it!), when one of those SL moments happened where she flew and flew and flew and ended up somewhere totally different, not at all by her designing. But it turned out she flew straight north, apparently, landing not too far up from the Wright House and very near a pink car parked next to Maverick City that you can rather easily see from the gallery porch. The SL Bakers had already noticed this car, which has it’s own special story I won’t go into here for various reasons. But Baker Blinker though she’d just seize the moment, as they say, and explore around the environment for a bit instead of returning to Rubi (just as a note: there seems to be a palpable energy resisting my rebuilding the gallery and/or temple on the Rubi properties).

A map of the sim was found in what appeared to be a new shop opening up next to the wall near Maverick City. This map shows the previous buildings in the middle of the sim now all vacant and up for sale. The sim literally has a huge vacant hole in its middle, taking up maybe 1/4th to 1/3rd of the whole sim now.

But you can also see the still existing Maverick City on the map, including its pinkish Last Straw Saloon that the new shop sits immediately northwest of…

… which then becomes Baker Blinker’s next destination. Or, more correctly, the already noted “hole in the wall” just beneath the floor level of this saloon, and the border of Tyta and Horisme. 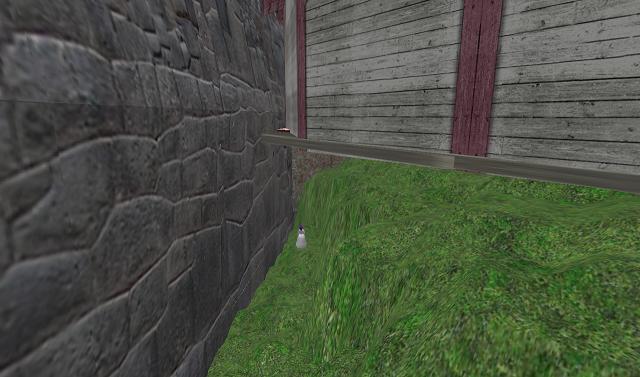 I don’t think Baker Blinker has been inside the Great Wall and the secret inner passage walked, top to bottom, by Baker Bloch. So this was a nice treat for her. Soon she comes upon the entrance proper to the wall in the Tyta sim…

Baker Blinker catches her breath at the sight of an avatar that appears to be right at this entrance. You see, Ms. Blinker basically likes to avoid mainland dwelling avatars, since she’s been harassed now a number of times in the past. That’s probably the main reason she allowed Baker Bloch to own the mainland gallery in Rubi (now Tyta). But she sees this is only a noobie person that has locked up. 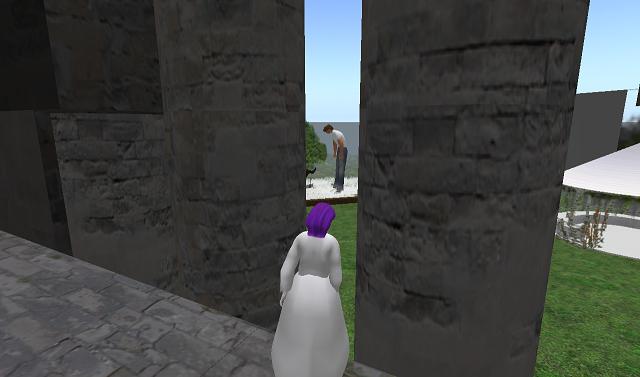 She goes to help. “Are you ok? Do you need assistance?” she asks. 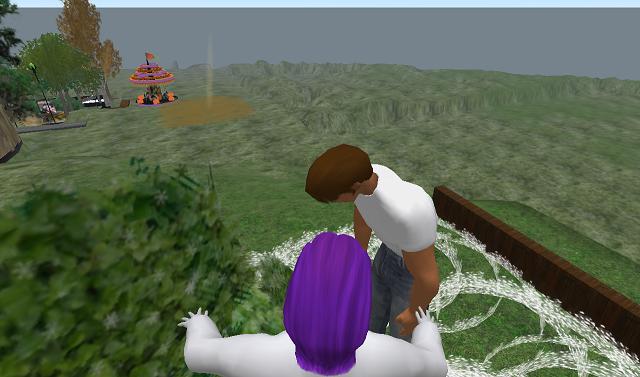 He he. That was a joke, because it’s really a statue called NOOB that Baker Blinker encountered on the other side of the wall. Cool thing was that you could copy it free of cost, which she promptly did.

Before either logging out or going on other adventures, Blinks decides on impulse to return to the pink car, perhaps to take a snapshot of herself sitting in it. Then she spies the picture directly in front of the windshield. 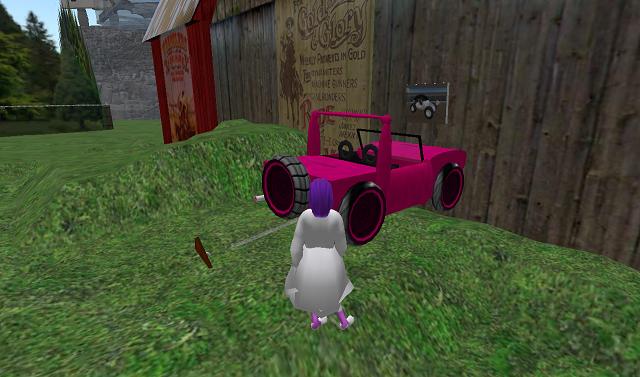 “Hey, isn’t that the same noob avatar as the sculpture I found just on the other side of the wall from here?” In checking, she finds out that this is quite so.

So a logical conclusion, it seemed, to this chapter of the pinkronicity story was to rez the NOOB stature next to the car and take a snapshot of the 2 twin avatars together. 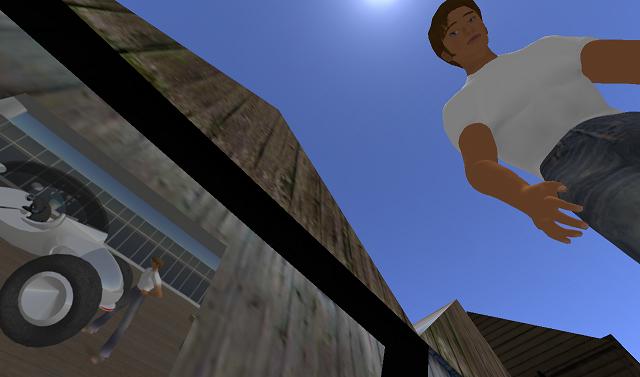