I was fairly close last night to actually buying a large piece of property on one of the newer, eastern continents (to the east of both Heterocera and Sansara, that is), but when I woke up this morning knew I couldn’t do it. Had a pretty long chat with the guy who would have owned a gallery next to mine; obviously it was important that we two get along and blend in a harmonious way. I figured I’d know by chatting with him. The property itself is situated right on the very tip top of a mountain, a volcano even, with a full protected sim directly bordering it to the south. Very reasonably priced for such a prime spot. Something like that on the Atoll would have run me at least 2 times the lindens and perhaps much more. Essentially it would have been a trade of both the 2 Rubi properties that I own, and also the Ziczac property, for this larger chuck. Another advantage is that it’s almost totally square, thus no weird elongated property lines to deal with. Hmmmm… nah, nah, can’t go down that road. I’m still exhausted from setting up the gallery where it is! The what-would-be neighboring gallery owner seems nice enough, but I don’t think my gallery and his gallery would work together. They’re of 2 different spirits. So, no, I’m not moving. Echoing the thoughts of my rl wife when I told her about the possible new move, maybe I just need a different hobby for a while. And I think that’s the answer: I need to focus on something else.

But anyway, here are some shots of the area to remember it by. The first uses a long draw to take in the whole void sim in front of the mountain. My mountain would have been the high one to the left.

Here’s a close up of the volcano. I could have owned a volcano! 😦

Then a shot in the woods below the mountains. The woods are nice but nowhere *near* as thickly treed as Corsica (see post immediately below; Corsica is, btw, a part of the same continent but not very close by) or even the Rubi Forest for that matter. Another advantage to staying in Rubi is that the forest is part of my sim, and not another whole sim by itself, which helps with lag supposedly. And my new sim would not have been “mature” in the least, as much if not most of the land is still up for sale. So I suppose I’m making the right decision.

But this is where I draw the line. I’m in Rubi for good now, perhaps. No consolidation of properties unless I can buy more in Rubi itself. And that’s that as they say.

A quite interesting and quite empty island that you can find here. I haven’t venture out to the edge of the world in quite some time, and now that the gallery is basically finished (I think!) can afford that luxury again. There’s not much in the way of wilderness on this edge, unlike some other times I’ve browsed. This island, in fact, is the only larger chuck of vacant land that I could find in my limited scan. But I’ll keep my eyes peeled better now.

Below is a long shot taking in almost the entire island. As you can see, the main distinguishing feature is a huge square of pine trees located more toward the western end. My guess is that it’s more than a sim in area.

There’s Baker Bloch running toward the trees after landing on the east side of the island.

Reaching the trees, a little out of breath.

A more open spot in the forest, allowing Baker to look around a bit. He sees only more trees.

Just when it seems the forest might magically go on forever and ever, Blochs pops out the other side to more totally void land. The square of trees are absolutely the only objects on the island, save maybe some extra-forest patches of grass here and there.

An aerial view looking west to east this time. 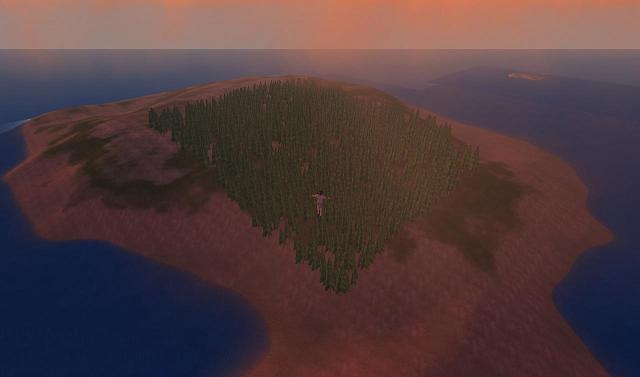 Baker hovering over the dense expanse of trees. 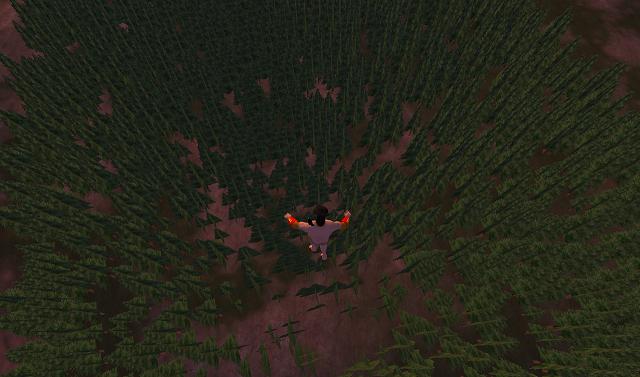 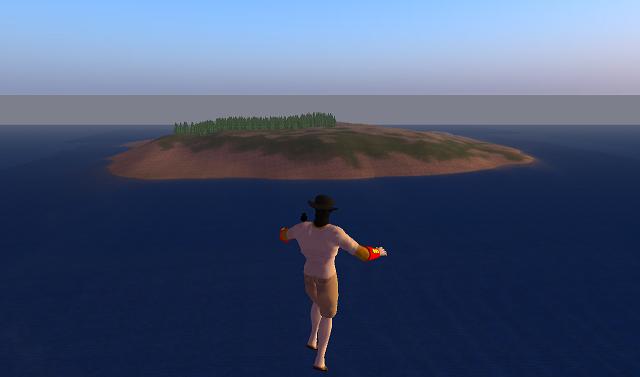