Well, more big news since the last post. Title sums it up, but in the time between posting the photos of this post and getting around to writing the text, I’d also bought a new Victorian-style house and did considerably more landscaping on the new lot as well. But I’ll get to those in future posts.

Below Baker Bloch ponders the meaning of this eerily close conjunction of our moon and the planet Mercury. It makes him think about the exact position of SL relative to RL: is SL on Earth somewhere, or perhaps beneath it? Why, then, is Mercury so close. It makes his head ache.

Additional view of Mercury through the one of the waterfalls dropping from the upper pool. In the meantime I decided to delete this half of the waterfalls on this particular level of B_Hivia in favor of an open look to the outside here. As I said before, or above or below or somewhere already, I decided to change back the name of this central magenta core of B_Hivia to “Outlands”, and returned one cobweb to this space as well. So we have the entrance and exit Outlands signs returned, as I mentioned. Edna Million (RL wife) approved of this reversion of sorts as well. 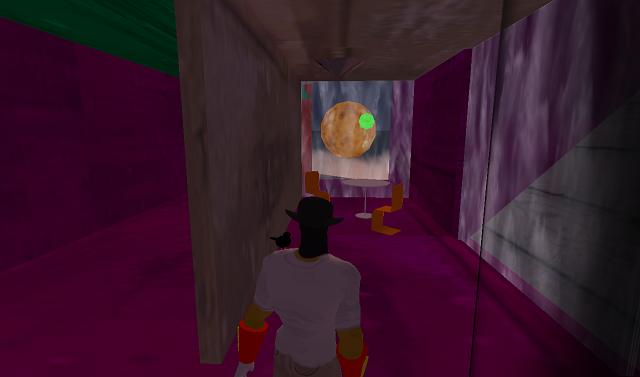 It was while Baker Bloch was just lounging around the upper pool in one of the 3 chairs at the table beside the eucalyptus tree that he notice what has since been jokingly deemed the “God Dog,” because of Hucka D.’s vivid dream about it. Can you see it yourself? The face in the tree/bark appears to be smiling and also may have two horns sticking out above. Let’s not go into the possible Satanic aspect of this, but all 3 family members agree that the possibility of horns cannot be ruled out. Interpreted this way, the smile could be seen as sinister, but that’s not how the Bakers’ and Hucka are taking it. They are instead steering an ultimate interpretation, at their own level, more toward a Green Man angle, and a communicative link with a hypothetical vegetative deity. 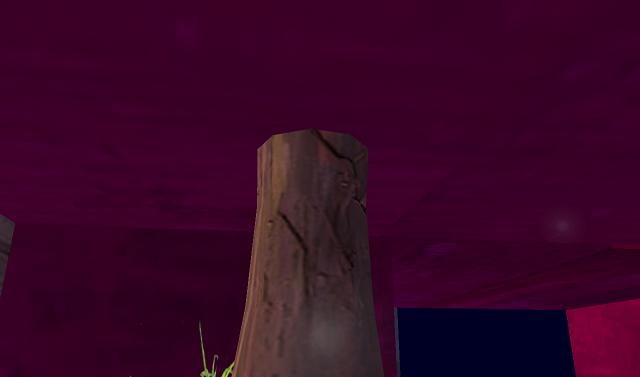 Shifting away from the Lynchian weirdness of B_Hivia and returning to more solid ground, I thought I’d provide a view out the east window of the recently grounded Hidalgo Gallery. This is over land that I now own, and have since positioned the Victorian-style house on, which blocks part of the vineyard in the background now.

And then 2 views of B_Hivia from the ground. I especially like that last one: B_Hivia shrouded in clouds, and directly above the Hidalgo Gallery. It really dwarfs the gallery in that picture. The house/castle behind my/our gallery is that of the neighbor, a nice guy who’s command of English is a little limited. As I’m counting now, there are only 3 owners in the entire sim we’re located on.