Several days ago, I realized that there is an active stargate on the little island in the ne corner of the Rodeo sim. Elsewhere I’ve called this island “Isle of Baker – Not.” Baker Blinker discovered that the artifact was a stargate, actually. Upon finding this fact out, my mind automatically thought of placing the same at the resonating spot on Isle of Baker, which we know from the Isle of Baker/ Magic Bench of the Pod Peaple post below has some kind of direct resonance with this Rodeo isle. Well, as it turned out, just today the real owner of Isle of Baker created stairs down to the ruins of the temple that I’ve used as a backdrop for several posts already, and *at the very spot* that I would have otherwise installed the stargate to match the resonating place on Isle of Baker – Not’s own stargate. So I, of course, took this as a sign that the stargate should *not* be installed on Isle of Baker. Instead the stargate at Rodeo should be used for whatever plans I come up with for such activity.

Queer how fate works that way. I think synchronicities like this tend to be actualized more quickly in Second Life for whatever reasons… not sure yet.

Exploring to the north of Isle of Baker near a popular island park, found these several small buttes clumped together. And right pretty too, aren’t they? 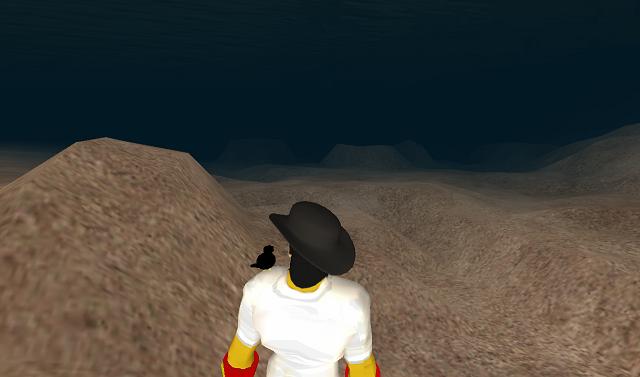 Of considerably more substance, seemingly, is this nearby high, needle sharp peak, a jarring contrast to the small, flat topped hillocks above. My best guess is that this may be the one and only Hilo Peak of pre-Linden Lab lore, once worshiped by the Ancient Ones as the “highest of the low”, which means that they considered it the highest peak entirely below the sea level of the Second Life sea regions present in their day. While it may not seem so high in the first photo here…

…the presence of a deep gorge immediately to the west makes for a truly dramatic rise as seen from its bottom. My estimation puts the total rise at 17 meters to needle spire top from the gorge’s bottom, which registers at “zero” elevation and thus making it the very bottom of the original sea area. The top of the needle is about 2 meters, if that, below the 19 meter level of the ocean at this location. While some of the newer sea locations created after the Ancient Ones had disappeared entirely from the continent have deeper bottoms, this still remains a dramatic underwater sight.

There are actually legends remaining on what could be two, separate Hilo Peaks, but I’m probably about 80% sure this has to be one of ’em, if not the only one, perhaps. I’ll have more on this lore as I do some additional research on these Ancient Ones.