So I decided to return to the faux Baker’s Island, as I’m calling it in part, to investigate the grounds further. My recent research of this particular sim via google search highlighted its special nature. Although, again, I won’t go into detail here or specifics, save to say that it really does seem to be the closest thing SL has to the forest of Baker’s Island, albeit only a small fraction thereof. As I also said before, it’d take 32 of these “empty” sims to cover Baker’s Island. Let me add that up. Even subtracting any upfront costs, like you would have w/ regular SL islands, that’s still $9400 of land fees every month ($295 per sim). Bet humble Bill Baker, RL owner of Baker’s I./Henry I., doesn’t pay that much a month on his low interest loan used to buy his island! Back to the investigation. 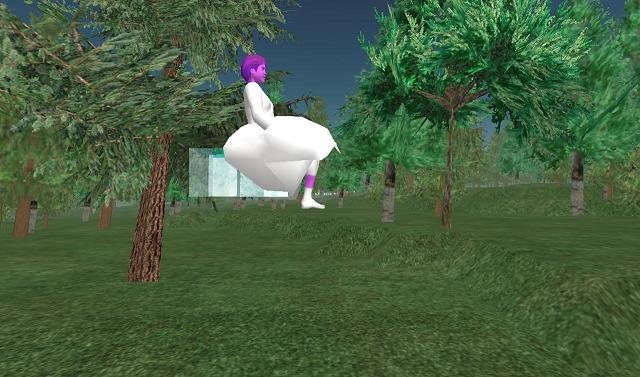 Found these 3 translucent cubes in the south-center of the sim, and couldn’t resist the temptation to sit on ’em. Creator’s name is Torley Linden of SL video tutorial fame. So that didn’t seem so mysterious since this is Gov. Linden land after all.

Here’s something I ran into early on in my investigation of this sim but had a hard time re-finding, perhaps because of all the trees surrounding it. We’ll say that anyway. Eventually I did spot it again several days later (or several hrs. later, SL time), and discovered it to be the creation of another Linden, Ben this time, who claimed it to be a tree planter, 1.1 version. But all of the trees of this forest seem to be the spawn of yet another Linden, Eric this time, who I later learned had long left Linden Labs but remains famous inworld for his many notable creations thoughout the metaverse, including terrain and landscape work. Again, this didn’t seem very mysterious, but I still wasn’t sure.

He ho, what’s this? Two pieces of vegetation that weren’t trees — the first I had found of this kind. I quickly scanned for creator/s, and found both to be the product of a non-Linden simply called “Chance”, with the objects titled “Pointy Bush, High” and “Pointy Bush, Low.”

Here was my next lead!

This Is Not The 9th

I was island hopping in the vast archipelago of SL the other night when I came across this queerer island devoted to the worship of the number 8, it appears. I won’t give the exact coordinates [3/28/08: yes I will now], but it’s real enough in SL dimensions. I created a landmark upon this visit to come back to later, and when I did, for some reason I teleported directly into this observatory at the top of a building that I’d missed before, although I thought I’d taken in the whole island in cursory form at the time.

So of course I had to look through the telescope. Amazing spinning cosmos above! I had only viewed the sky through the telescope perhaps 20 seconds or so when I spotted a tiny bit of cosmos that was a little less blurred, a little sharper edged compared to all else spinning around so quickly within the lens. I used my focus tool in combo with the telescope’s “natural” magnification to zoom in closer. In this way, I could lock on a particular portion of the sky and stabilize the rotation. It couldn’t be, but there it was: Baker’s Island — in the sky! So I was right about it being a moon of SL, or perhaps a moon of the SL system as a whole, thinking of Pluto again as possibly just an escaped satellite of the 8th planet Neptune. Hard to tell how far away it was with this crazy ass telescope, and the fact that the roof itself seemed act as an additional, giant lens to the configuration. Did this rotating cosmos above me only represent a tiny fraction of the sky above SL? And, if so, why did it just happen to contain the part with the teeny weeny Baker’s Island? 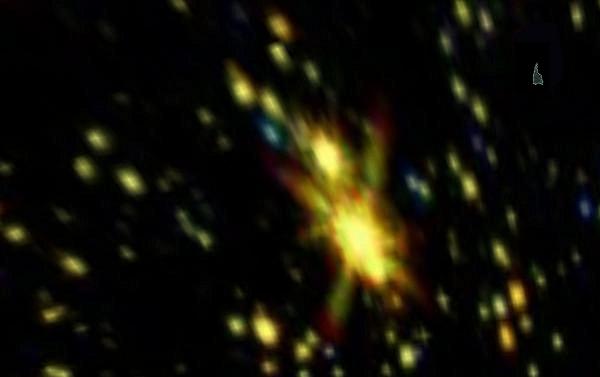 I used a bit of synchronicity to make the determination that Baker’s Island was, in fact, not a planet within the SL system, but a moon or sub-planet at best. Let me google the latest term for former planet Pluto to check. Yes, the politically correct term for Pluto, Eris, and other, similar sized bodies orbiting our RL sun is “dwarf planet”, which I gather is not much better than moon status.

But the reason I determine this was that, after all, I just happened to find this planet using a telescope owned by a group that worships the number 8. Then it came together for me: someone here, perhaps the group as a whole, was studying the “9th” just to argue this very point. The SL solar system stops at 8, just like our RL solar system. Neat and tidy, an octave of completion. So Baker’s Island is the Pluto of this particular system. Is it the actual Baker’s Island off the coast of Cape Breton, or at least an exact replica? I had set up a faux Baker’s Island using a extensively wooded, flat sim in the southwestern part of the Sansara continent. Did I need to find a way to this perhaps much more real Baker’s Island? I had some pondering to do.

The Answer Is Here And Not Here

To Back Up A Bit…

Shortly after being reborn into Second Life, I found myself naturally drawn to the quite vast Forest of Kahruvel mentioned in previous posts. It seems like many, many months since I first flew along the northern line of this park at night, following the paved road for part of the way, and the coast the rest of the way. Yet it has only been about 3 weeks, probably. It didn’t make a huge impression upon me the first time, admittedly, but then I found myself coming back again and again. A closer study of Salazar Jack’s blog made me appreciate the relatively deep mythology behind the forest, and the name change involved. HeadBurro AntFarm’s blog about the exploration of Cowell after his transformation into half-man, half-antelope prompted me to reexplore the same. The builders’ fascination with the number 8 through repeated use of the octagon in designs, in retrospect especially (see posts above this), added another inviting aesthetic and intellectual coloring to the increasingly rich picture. What *was* the meaning of all this? Like several before me, apparently, I was also attracted to the obelisk on the island in the corner of the Rodeo sim.

One day, not long after conducting my first experiments with building in SL in the same spot, I came across this very curious find, which connected to another story in a quite different part of Sansara, not too awfully far from the woods I decided to use as cinematic backdrop for the Baker’s Island storyline. And, yes, this is another collage, because I wanted to build this eye, but simply didn’t have the necessary skill set, you see. So I relied on old talents. 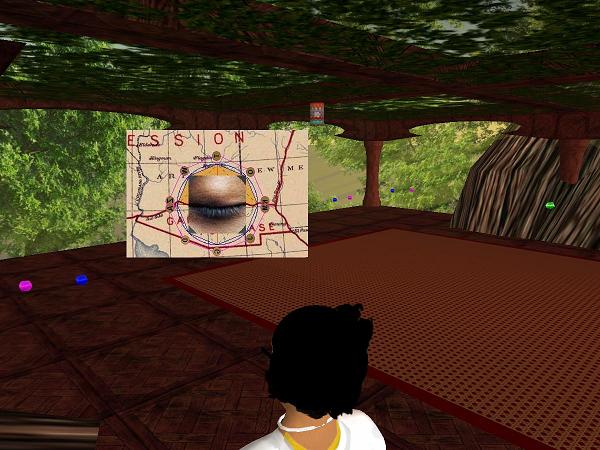 The eye was then taken back to a treehouse in the unnamed forest (that’s the 3rd forest mentioned here, in case you’re counting), where I knew, or at least someone knew that the thing could be opened there safely. The thing is, all this really happened in reverse: the eye was opened first, then closed, then placed in the Rodeo sim corner. And so it’s not surprising that there were time and space distortions involved, loss of memory, the usual stuff.

Yeah, it’s best to start here, then. The eye was opened, then closed, then stashed in the sim corner for me to find but which I’d already found. Obviously we must move on from this for further clarification (I’ll get to that involved map of AZ/NM again soon, I suspect).